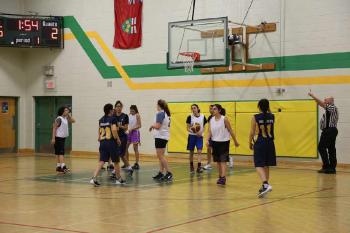 A provincial Indigenous basketball tournament is being held later than usual, but will experience some tremendous growth this year.

Then at last year’s tournament held in Timmins, there were six male and four female clubs.

As for this year, the event, organized by the Aboriginal Sport and Wellness Council of Ontario (ASWCO), there have been two new age groupings added.

There will be a co-ed junior division for those ages 9 to 12. And there will also be adult groupings (20 and over) for both women and men.

“The response has been phenomenal,” said tournament organizer Andy Rickard.

Though registration is still open for a couple more days, Rickard anticipates there will be 10 to 12 male teams and six or seven female entrants in the senior category.

Organizers plan to cap the number of clubs in the co-ed junior and adults divisions to four clubs per category.

They already have the maximum four clubs in both the co-ed junior and adult male groupings. And they’re also hoping to have four in the women’s adult division.

Both the 2015 and ’16 Nish Invitational tourneys were held in the month of February. As for this year’s event, it was originally scheduled for March in Thunder Bay. But that event was cancelled.

ASWCO officials decided in the spring to move this year’s event to Sault Ste. Marie.

“It seems more centrally located and we’ve been able to attract teams from all over Ontario,” Rickard said.

Rickard didn’t seem to mind the fact he didn’t have much time to plan for this month’s tournament.

He had worked as the recreation manager for the Garden River First Nation from 2007 to 2015. During this stretch he organized his share of basketball, volleyball, floor hockey, slo-pitch and golf tournaments.

“I’ve got a good sense of what needs to be done,” he said.

Another reason why Sault Ste. Marie was chosen to host this year’s Nish Tourney was because the northern Ontario city successfully ran a provincial Aboriginal volleyball tournament this past spring. That tournament featured 14 girls’ teams and five boys’ squads.

“Based on that success, we wanted to see how basketball was going to do,” Rickard said.

Rickard said ASWCO officials were also keen to give those ages 20 and over a chance to maintain an active lifestyle.

“There really isn’t that many opportunities for adult programming,” he said.

ASWCO reps obviously feel there is a huge need for adult sporting activities. That’s why they will also be hosting the inaugural Masters Indigenous Games in Toronto next July.

ASWCO also hosted this year’s North American Indigenous Games. Those Games, held in July, were primarily held in Toronto. Neighbouring communities, however, also hosted some of the events.

The 2018 Masters Indigenous Games, for those 20 and over, will include seven contemporary sports. They are athletics (track and field), basketball, golf, hockey, soccer, softball and volleyball. Five traditional sports will also be contested. They are archery, lacrosse, standing kick, teepee building and tug of war.

“We’re trying to make it a natural transition in the other age categories,” he said.

Matches for this year’s tourney will be held at Sault College and a local high school, White Pines Collegiate and Vocational School.

“The atmosphere is wild,” he said. “That’s where their varsity team plays. It’s just a beautiful facility and it is brand new.”

Rickard believes all of the tournament participants will be taking the event seriously.

“Anybody that is coming here is aiming to win,” he said. “But we just want to give them an opportunity to play.”

Rickard said he’s noticed there are some teens who have registered for the tournament and a parent has also signed up in one of the adult divisions.

ASWCO reps will also be scouting the tournament. In 2016 the association had sent male and female teams to represent Ontario at a prestigious youth event, the Native American Basketball Invitational, held annually in Arizona.

Rickard said ASWCO is considering sending clubs to next year’s tourney in Arizona as well.