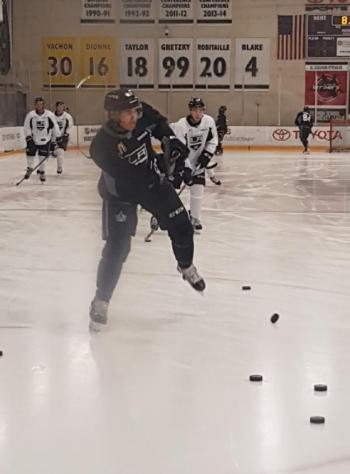 Whitecloud, a member of Manitoba’s Sioux Valley Dakota Nation, was bypassed by all 30 clubs during the 2015 and ’16 NHL Entry Draft, the two years he was eligible to be selected.

Now, Whitecloud is generating his share of attention among pro talent seekers. He’s a 20-year-old defenceman who shone in his first season with Minnesota’s Bemidji State Beavers during the 2016-17 campaign.

A number of NHL organizations were trying to convince him to turn pro immediately after his first NCAA season with the Beavers, but he felt he would benefit from at least one more season of college hockey before making the jump to the professional ranks.

And Whitecloud, who was born and raised in Brandon, said as many as 29 NHL squads (there are now 31 teams, including the expansion Vegas Golden Knights) were keen to have him attend their summer development camp.

All NHL squads stage these camps, featuring draftees and free agent invites, a few days after the pro draft each June.

Whitecloud opted to accept the Los Angeles Kings’ invitation to attend their development camp, staged June 27 to June 30. He said he chose to attend the Kings’ camp because the L.A. event included plenty of one-on-one instruction as opposed to numerous scrimmages offered by some other organizations.

“It was a life-changing experience,” Whitecloud said of his time at the Kings’ camp.

The event was held at the Toyota Sports Center, the Kings’ practice facility located in El Segundo, California.

"Every kid by now feels they know everything,” he said. “In all honesty, I didn’t know half the stuff they told me.”

Whitecloud added he was keen to soak up all the information he could while at the camp. He had tons of questions for members of the Kings’ staff, including president Luc Robitaille and vice-president/general manager Rob Blake, two of the greatest players to don Los Angeles jerseys.

“Everyone on that staff has been a professional athlete,” Whitecloud said. “They made you feel welcome. It was a great atmosphere. And I was always picking brains apart, trying to get as much information as I could.”

A familiar face joined Whitecloud at the camp. That’s because another free agent invitee was his Bemidji State teammate, goaltender Mike Bitzer.

“We ended up hanging out a lot,” Whitecloud said. “And it was fun getting to shoot on him at the NHL level.”

Brendan Harris, a forward who is entering his rookie season with the Beavers this coming season, attended the Golden Knights’ development camp in Las Vegas.

Whitecloud believes having three Bemidji State players who participated in NHL development camps will be a benefit to the Beavers.

“That will be something that we can bring back to the team,” he said. “Maybe we can help our teammates and give them a little bit of advice.”

Whitecloud certainly exceeded expectations in his rookie collegiate season. He originally thought since he was a newcomer to the squad he would be a healthy scratch for the majority of games. But he ended up appearing in all 41 of the Beavers’ matches. And he was the club’s top-scoring defenceman, earning 17 points, including three goals.

Whitecloud’s efforts earned him some league-wide praise as he was named to the Western Collegiate Hockey Association’s all-rookie team.

“That seems to be what the plan is,” he said.

Even though he attended the Kings’ development camp, Whitecloud is still considered a free agent. If he decides that he is indeed turning pro, he would be eligible to sign with any NHL club following the conclusion of the Beavers’ 2017-18 season.

Though he does not know how long it would take him to complete his degree, Whitecloud said he is planning to eventually resume his academics.

“That’s the biggest thing for me is getting that degree because there is life after hockey,” he said.

Prior to joining the Beavers this past season, Whitecloud had spent two years with the Virden Oil Capitals, members of the Manitoba Junior Hockey League.

Following a 10-point rookie season in 2014-15, Whitecloud became a dominant player during his second year with the Capitals. He ended up with 40 points, including a team-high 34 assists, in 59 regular season contests.