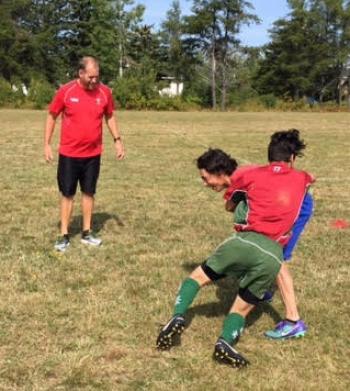 New Brunswick will soon have its own provincial Indigenous rugby sevens teams. That’s because earlier this year officials from the Aboriginal Sport and Recreation New Brunswick (ASRNB) launched their Indigenous Spruce Rugby program.

“We were looking at a cost-effective sport to get our youth into,” said Jason Peters, the CEO of the ASRNB. “We thought sevens would be a good place to start.”

The program kicked off following discussions with officials from the New Brunswick Rugby Union, the sport’s governing body in the province.

As its name implies, rugby sevens is played with seven players per team on the field. The most common form of rugby, rugby union, has 15 players per club.

Rugby sevens is a growing sport internationally. In fact, it made its Olympic debut at last year’s Games in Rio de Janeiro, Brazil.

Peters is hoping to introduce the Indigenous Spruce Rugby program to various First Nations in the province. He believes it is better to start with rugby sevens, which features squads with smaller roster sizes.

“That really helps some of our smaller communities,” he said.

For the first time rugby sevens was also introduced this year at the New Brunswick Indian Summer Games. The Kingsclear First Nation hosted the annual games this past month.

Though Listuguj athletes are from neighbouring Quebec, those from the First Nation near the New Brunswick border have traditionally competed in the Games as well.

Squads played each other once, resulting in two games per team.

“It was non-contact so we ended up playing flag rugby,” Peters said. “The kids had an absolute blast with it.”

Meanwhile, the Indigenous Spruce Program is hoping to soon have a pair of provincial under-18 teams (one female and one male) in place.

A total of 20 athletes showed up for the program’s first tryout, held on Sunday at the Esgenoopetitj First Nation. Three more tryout camps will be held.

For starters, there will be one on the Tobique First Nation this weekend. And then a pair of camps will be held the following weekend. Those will be on the Eel River Bar First Nation and in Fredericton.

“At this point the whole plan is to keep as many kids as possible, if not all of them,” Peters said. “The nice thing about rugby is we can put together an A side, a B side and a C side.”

Based on how many athletes show up at the various camps, Peters said program officials might have to rethink their original plan and add under-16 categories as well.

Peters is hoping teams from the program attend a tournament in New York City this November.

The Indigenous Spruce Rugby program has also received confirmation that it will be permitted to enter squads into the national rugby sevens championships this coming March in Victoria, B.C.

Rugby Canada officials are allowing New Brunswick to enter its own provincial teams as well as those representing the Indigenous program.

The Indigenous Spruce Rugby program is already guaranteed of having some elite athletes on its rosters.

A pair of players from the New Brunswick provincial team program have committed to suit up for the Indigenous teams.

Those athletes are Monique Francis-Savoie and Isaac Cyr, who are members of the Esgenoopetitj First Nation and Elsipogtog First Nation, respectively.

Francis-Savoie was a member of the provincial girls’ under-18 squad this summer. And Cyr suited up for the New Brunswick boys’ under-15 club.

“It’s a great starting point for us,” Peters said. “And we also do have a number of athletes who play in the high school ranks.”

Peters said the Indigenous program is also looking to add talented athletes and turn them into rugby players.

One such example is Madison Wilson from the St. Mary’s First Nation. Wilson, a sprinter, won three medals at this year’s North American Indigenous Games, primarily staged in Toronto in July.

Wilson is expected to attend one of the upcoming Indigenous Spruce Rugby tryouts.

Peters is also thrilled the Indigenous program has also managed to bring Blake Edwards, the former technical director for the New Brunswick Rugby Union, on board. Edwards will be among those coaching in the program.

“What a great opportunity that is to help develop the game,” Peters said of Edwards’ hiring.

Besides the New York and Victoria tournaments, Peters said the Indigenous program will also be looking to host a national championship next year.

He’s hoping program participants also go on a tour of the United Kingdom next year.

“We’re hoping to introduce our youth to the history of the game,” he said.