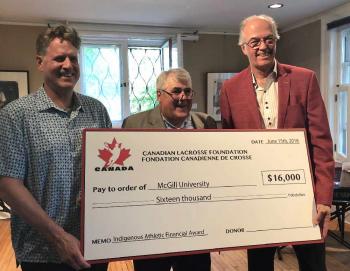 Canadian Lacrosse Foundation got the ball rolling with a $16,000 donation to kick-start the scholarship fund. Photo courtesy of McGill Athletics

Officials from the McGill University athletic department have made it more appealing for Indigenous lacrosse players to attend the prestigious Montreal school.

That’s because the school is hoping that it will be able to soon start handing out athletic scholarships to Indigenous players who are on the McGill men’s lacrosse squad.

The scholarship is a legacy of the 150th Anniversary of Lacrosse Celebration staged in Montreal last June.

Jim Calder, a board member of the Canadian Lacrosse Foundation, said the idea of the scholarship began in 2017 while he was enjoying a drink with Tim Murdoch, the head coach of the McGill men’s lacrosse squad.

“We were talking of creating some sort of legacy from last year’s event,” Calder said. “We thought it would be a great opportunity to try to set up something for Indigenous student/athletes for lacrosse. Tim and I were brainstorming and we thought what a good idea it was.”

The concept is much closer to fruition right now.

That’s because the Canadian Lacrosse Foundation got the ball rolling with a $16,000 donation to kick-start the scholarship fund.

That’s 20 per cent of the $80,000 required to get the scholarship endowed. The plan is once the $80,000 principal amount is in an account, then scholarship money can be awarded from any additional funds or the accumulating interest.

Donations from the McGill athletic department and other donors have already bumped the funds raised to $50,000 for the scholarship, which was officially announced by the university this past weekend.

“This is just a small way we can honour the game,” said Murdoch, who is heading into his 16th season as the head coach of the McGill men’s squad.

Murdoch believes the lacrosse scholarship that will be offered by his school could indeed be a precedent-setting one.

He is unaware of any other athletic scholarship that is only available to an Indigenous student-athlete at a Canadian post-secondary school.

Ideally the scholarship will be awarded to an Indigenous player on the McGill men’s lacrosse team.

But if there are no Indigenous players on the club’s roster in any given year, then the scholarship could end up being awarded to another Indigenous athlete on any other McGill sports team.

Because of its high academic standards, McGill is one of the most difficult universities to get into in Canada.

Regardless of one’s athletic ability, Murdoch said only high-achieving students are accepted at McGill.

The McGill roster for its 2018 campaign is expected to feature four Indigenous players. This list includes Kieran McKay, a Cree from Richmond, B.C. who became the first Indigenous player to suit up for the McGill lacrosse club in 2016.

Joining the team this season will be Cougar Kirby, a Mohawk from Kahnawake, Que.

Kirby is transferring to McGill after having spent the past three seasons at the NCAA Division 1 level with the University of Albany.

“He’s had a great experience at Albany,” Murdoch said. “But he told me he wants to come home and finish his schooling.”

The two other Indigenous players who will be in McGill’s lineup are Hunter Zawada of Kimberley, B.C., and Saskatoon’s Liam McMaster.

The league includes one other Quebec-based squad, Bishop's Gaiters from Lennoxville.

Lacrosse is deemed a club sport at Canadian universities. It is not a varsity sport and not governed by U Sports, the national governing body for university athletics in Canada.

Since it does not fall under the U Sports jurisdiction, the CUFLA has its own rules regarding eligibility.

There is no restriction on the number of seasons a player can suit up for a team in the league, unlike U Sports athletes who can play a maximum of five years.

But those who have suited up for a professional field team in the American-based Major Lacrosse League are not eligible to compete for a CUFLA squad.