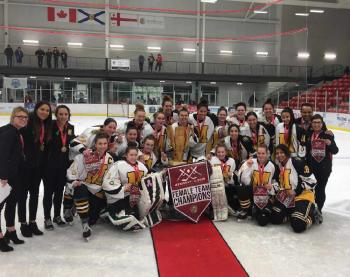 Of the 19 players on the Manitoba roster, 13 were also on the team that captured the gold medal at the 2017 NAHC staged in Cowichan Valley, B.C.

As for this year’s event, which concluded this past Saturday, it was hosted by Membertou First Nation in Nova Scotia.

A total of 20 clubs – 10 female and 10 male – participated at this year’s tournament. The number of entrants was up from the 16 teams that competed at the 2017 NAHC.

Participation numbers rose because the country’s most populous province iced Ontario South and Ontario North clubs in both the female and male categories. In recent years there was just one Ontario team in each division.

Also, New Brunswick opted to enter its own teams this year. Previously players from New Brunswick had been members of Team Atlantic.

Dale Bear, the head coach of the Manitoba girls’ club, had an inkling that his charges were capable of another strong performance at the tournament.

“We had a good strong core from last year’s team that were back,” he said. “We lost a couple of key players, but I was able to add a couple of big names.”

The Manitoba club was without the services of forward Mariah Gardner, the top point getter from the 2017 NAHC. Gardner was a rookie this season in the NCAA ranks with the Minnesota State Mavericks.

Manitoba’s roster though this year included 16-year-old Métis Makenzie McCallum. McCallum racked up 12 points, including six goals, in six matches at the nationals.

Manitoba managed to win all of its contests at the tournament. That included a 5-4 victory over Ontario South in its first round-robin game.

Despite the closeness of that contest, Bear said members of his squad were confident they could once again beat the Ontario South side if they met again.

“The girls were saying that was just a warm-up and we’ll be ready for them if we play them again,” Bear said.

Manitoba jumped out to a 3-0 lead in the gold-medal game. But Ontario South came back to make things interesting, trailing by just one goal in the final minute.

An empty-net goal by Manitoba with 46 seconds remaining in the match sealed the deal.

“Ontario South definitely gave us a run for our money this year,” Bear said.

Now with back-to-back NAHC crowns, thoughts have already turned to the 2019 tournament, which will be staged in Yellowknife. Bear was asked whether he believes Manitoba will be able to win a third straight title.

“We should have another strong team next year,” he said. “Our future looks bright for the Manitoba team.”

As for Roloson, who appeared in 635 NHL games, suiting up for six different squads, this marked his first year of involvement with the B.C. boys’ entry at the NHL.

Roloson, who lives in Victoria, B.C., is not Indigenous. But his wife Melissa is from Ontario’s Mississauga First Nation.

Since retiring as an NHL player in 2012, Roloson has remained involved with the sport. He was a goaltending consultant with the NHL’s Anaheim Ducks from 2013-16.

And he spent this past season as a consultant with the Western Hockey League’s Victoria Royals. He’s exploring his opportunities at the moment and is uncertain whether he will return to the Royals for the 2018-19 campaign.

Since this was his first experience with the NAHC, Roloson wasn’t quite sure what to expect.

“I just knew Saskatchewan, Manitoba, Alberta and Ontario would have strong teams,” he said. “I was going in blind.”

But he was also expecting his club to fare well.

“Even during the evaluations the thinking was we were putting a team together a team that could challenge for the gold medal,” he said.

Roloson’s charges managed to win their first two round-robin outings, 9-2 over New Brunswick and 4-2 over Team Atlantic. B.C. then tied Alberta 5-5 before losing 5-1 versus Saskatchewan in its final round-robin game.

B.C. then advanced to the gold-medal match by edging Manitoba 4-3 in its semi-final game.

Roloson said he’d welcome the opportunity to coach again at the NAHC.

“If I don’t have another thing on the go then and if I get asked back, I would go again,” he said.