Littlechild will be inducted into Canada’s Sport Hall of Fame 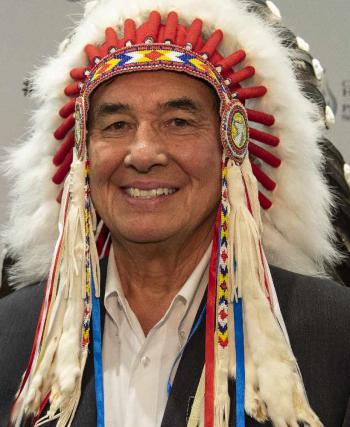 Yet another hall of fame has come calling for Wilton Littlechild.

And though he has already been inducted into seven other halls of fame, the 74-year-old Cree who lives in Maskwacis, Alta., is understandably ecstatic about his latest accolade.

At a news conference in Toronto this past Thursday it was announced that Littlechild would be one of eight individuals who will be inducted into Canada’s Sports Hall of Fame later this year.

Though the country’s sports hall of fame is located in Calgary, induction ceremonies will be staged in Toronto on Oct. 18.

“This is actually the pinnacle of it since it is the top sports hall of fame in Canada,” Littlechild said of his most recent induction announcement.

Littlechild, better known by his nickname Willie, was a star athlete in numerous sports. But he’ll be inducted into the national hall of fame via the builder’s category for his extensive Indigenous sports ventures.

His efforts include helping to establish the North American Indigenous Games (NAIG), which were first held in 1990, and the World Indigenous Nations (WIN) Games, staged for the first time in 2015.

Littlechild first heard that he had been nominated as a possible inductee into the Canadian hall of fame about a month ago.

“It was a total surprise,” he said. “To this day I still have not met the person who nominated me.”

Littlechild was contacted to speak at a sports development conference in Winnipeg in May. The individual who invited him informed Littlechild she had also submitted a nomination on his behalf to hall of fame officials in Calgary.

Littlechild was then contacted about two weeks ago by Robert Rooney, the chair of the Board of Governors for Canada’s Sports Hall of Fame to inform him he would indeed be one of the individuals inducted this year.

And entering the hall like Littlechild through the builder category is Dr. Sandra Kirby, a former Olympic rower and a noted sports administrator and educator.

“It’s a very prestigious group,” Littlechild said. “To be considered in that same circle – in a sacred space if I can use a term from our culture – is a great honour.”

Prior to meeting all of the other inductees at last week’s news conference in Toronto, Littlechild was most familiar with Allen and Keon.

Allen, a quarterback, led teams to four Grey Cup championships. Two of those titles, in 1987 and 1993, were with the Edmonton Eskimos, a Canadian Football League organization in Littlechild’s home province of Alberta.

Keon, considered one of the best Toronto Maple Leafs of all-time, was a member of four Stanley Cup winning squads.

“I had played a couple of games against Maple Leaf alumni,” said Littlechild, who toiled with the University of Alberta men’s hockey squad during his collegiate days. “But he didn’t play.”

Besides playing hockey at the University of Alberta, Littlechild was also on the school’s swim team. He also found the time to serve as the student manager for the university’s football and men’s basketball squads.

Littlechild, who is now 74, overcame many obstacles to achieve greatness in his life. He was raised by his grandparents on the Ermineskin Cree Nation in Maskwacis.

And he attended residential schools from 1951 to 1964. He persevered and played a number of sports while growing up.

After obtaining a physical education degree in university, Littlechild followed that up by getting his Master’s degree. And then in 1976 he completed his law degree, becoming Alberta’s first treaty First Nations individual to become a lawyer.

Littlechild also went on to become a federal politician, serving as a member of Parliament from 1988 to 1993.

Other accomplishments include serving as the commissioner for Canada’s Truth and Reconciliation Commission and being named the Grand Chief of the Confederacy of Treaty Six Nations in 2016.

Littlechild shows few signs of slowing down. He was a key reason the second WIN Games were held in Edmonton and on the Enoch Cree Nation last year.

“I’m working on the third one now,” he said. “Hopefully the selection will be made soon.”

The two countries still being considered to host the 2019 WIN Games are New Zealand and Colombia.

Littlechild is also serving as an ambassador and helping Calgary in its pursuit to host the 2026 Winter Olympics.

Calgary’s city council has already voted twice in favour to pursue the bid. A referendum will soon be held to determine if the city’s residents are on board with the venture.