Listuguj teen rugby player will suit up for Canada 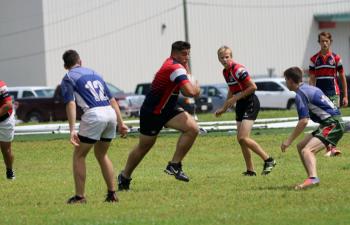 Hudson Barnaby powers through the competition. Photo by Jackie LeBlanc.

Hudson Barnaby has quickly made a name for himself in rugby circles.

Though he took up the sport only last year, Barnaby, a member of Quebec’s Listuguj Mi’qmaq First Nation, has already cracked a national team.

Barnaby, 17, found out this past weekend that he has been named to the Canadian male under-18 squad.

The club will compete at a tournament in San Diego, California. That event begins Dec. 28 and continues until Jan. 4.

“I’m excited and nervous,” Barnaby said of his debut with the national team program. “I know I’m going to do well. I’m going to play my best.”

Barnaby has been brimming with confidence about his rugby skills since he took up the sport last year.

He received his introduction by joining the Indigenous Spruce Rugby program, which was offered to Indigenous youth from various First Nations across New Brunswick.

When that program folded earlier this year, Barnaby joined the New Brunswick boys’ under-18 provincial team.

Though he lives in Quebec, Barnaby’s First Nation is mere minutes from the border and he is allowed to play rugby in New Brunswick.

Barnaby said suiting up for Quebec’s under-18 team was not a viable option for him as the club trains in Montreal, about a 10-hour drive from his home.

He still had a rather lengthy commute though to meet up with his New Brunswick teammates, who practiced in Fredericton and Rothesay, about four and five hours away, respectively.

Jamie Gray, the head coach of the New Brunswick’s provincial side, welcomed Barnaby with open arms. That’s because he was already well aware of Barnaby’s imposing figure – he’s 6-foot-2 and weighs 287 pounds – and his prowess on the rugby pitch.

Gray was shocked to be told how much Barnaby actually weighs. He guessed the teen was at least 50 pounds lighter than he is.

Gray said the fact Barnaby, who plays the prop position, has already made a national team is a huge accomplishment.

And actually, he still hasn’t.

New Brunswick’s under-18 squad participated in three events in 2018.

But Barnaby missed the first one in July, a match against Nova Scotia’s under-18 club, because he was still with the Indigenous Spruce Rugby program at the time.

Barnaby though did join the New Brunswick team later in July and competed at the Atlantic championships in Truro, N.S.

Barnaby and his New Brunswick teammates also participated at their Eastern Canadian championships in August in Wolfville, N.S.

Gray said Barnaby’s commitment to the game was evident when he attended the Wolfville tournament. Since he was unable to secure a ride, Barnaby hopped on a bus for about 10 hours to travel to the event.

Gray believes Barnaby could very well have a bright future in the sport.

“He’s got the dedication,” Gray said. “And with his physical attributes and his love of the game, he can go as far as he wants to.”

Barnaby’s high school does not have a rugby program. Instead, he suits up for the Sugarloaf varsity boys’ basketball club.

But it is rugby that he is hoping to continue playing in the coming years.

Barnaby has already decided he would like to head to the nation’s capital for his post-secondary studies, possibly to eventually become an architect.

His university options include Carleton University and the University of Ottawa. Or he might decide to attend Algonquin College, also in Ottawa.

Despite his limited rugby experience, Gray attended a four-day October tryout in Wolfville for the national under-18 side.

“I knew I had done pretty well,” he said. “I had played my best game at the tryouts.”

That tryout, however, only included players from eastern Canada. Additional tryouts were held for other players in other parts of the country.

“I had high hopes I’d be picked for the team,” Barnaby said. “But I knew there could be somebody better and bigger than me at the other tryouts.”

National team officials emailed Barnaby’s mother this past Sunday to tell her that he had indeed been selected to the San Diego-bound club.