LISTEN: Siksika rider says staying on his bull for 88.5 score was best feeling of his life 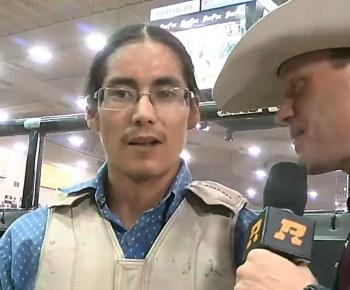 Travis Maguire, a young cowboy from Siksika Nation in Alberta, has dedicated this year’s efforts on the rodeo circuit to his late father, who Travis lost a year ago.

His dad was a big part of his rodeo career, Maguire told Jeremy Harpe of CJWE 88.1 FM in Calgary.

“He always took me to rodeos, and he always supported me. And he always put me in those positions where I felt uncomfortable, but little did I know it was a positive outcome. It all paid off now.”

Maguire rode his first bull when he was 14 years old. He recently became the tour bull riding champion at the Indian National Finals Rodeo, gaining entry to the Professional Bull Riders Velocity Finals in Las Vegas, where he scored an impressive 88.5 in the second round on a bull called Hailstorm. He ended in 7th overall for the competition, but in the money collecting $6,800 for his efforts.

“The experience is awesome,” Maguire said. “I felt comfortable. I felt more confident. I just felt really good about things.”

It didn’t start that way when he entered the PBR doors. Once again, out of his comfort zone just looking at the line up of competitors.

“I seen some pretty big-time bull riders there… People I would see on TV and people I looked up to… I was a little bit star-struck… It was an overwhelming experience.”

Staying on his bull was the best feeling of his life, he said.

The average bull is about 1,500 pounds. Holding on for an eight-second ride is a thrilling and dangerous endeavor.

“Think about the most extreme sport you do and times it by 10 or 15,” said Maguire.

Over the winter, Maguire said he took part in wild horse races and in the summer he did Indian relay, and with the bull riding and getting banged up in the championship round, he’s a hurtin’ unit.

“It comes with the territory,” he said. He tries to stay positive, and in the moment when he rides.

For those young people who might want to be follow in his footsteps, Maguire says “Think big and go for it.”

Sacrifices will have to be made, and young ones will feel out of their comfort zone, but “anything is possible.”