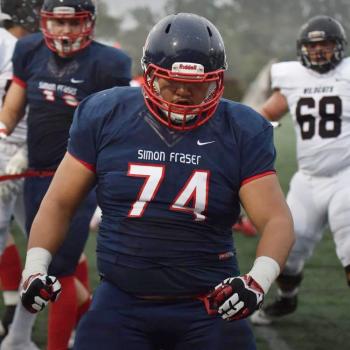 “I still have a passion for it and I want to keep playing.” —Rey Arcega
By Sam Laskaris
Windspeaker Contributor
BURNABY, B.C

Rey Arcega finds himself in a state of limbo.

While the academic part of his life is certain, Arcega is not quite sure where his athletic career is headed, if anywhere.

The 6-foot-1-inch, 290-pound lineman believes he has what it takes to turn pro and play in the Canadian Football League (CFL) in 2019.

In the coming weeks he will find out whether he has been invited to the CFL’s western regional combine camp, expected to be held in March. In recent years this camp has been staged in Edmonton.

The top performers in both of these camps are then invited to a national combine camp, ahead of the CFL draft in April.

“It’s just a ballpark figure but I think I could go somewhere around the third round of the draft, which has eight rounds,” Arcega said.

First up, however, Arcega is hoping to officially receive an invite. CFL representatives will be talking to university coaches on both sides of the border in the coming weeks to determine which senior players to invite to its camps.

Arcega has had his share of ups and downs in his football career. He started playing the sport at age 11 at the Peewee level, when he joined his hometown Calgary Wildcats’ organization.

He went on to play three years of high school ball at Calgary’s Central Memorial High School, which offers Grade 10 to 12 classes.

Arcega had originally agreed to play his university ball at the University of British Columbia.

“UBC kind of lost interest in me,” Arcega said, adding he had to take an additional year of high school classes in order to upgrade his marks.

Arcega though decided to try suiting up for another B.C. squad, Burnaby-based SFU, where his older brother Marco also played. Though he wasn’t recruited, Arcega ended up being a walk-on for the SFU Clan.

The Clan, which competes in the Great Northwest Athletic Conference, is the only Canadian squad in the NCAA Division II league.

Arcega also had some interest from American schools following his high school days. A number of National Association of Intercollegiate Athletics (NAIA) teams—considered a step below the NCAA—had a look at him. And so too did some NCAA Division III squads.

But he wasn’t able to land a lucrative NCAA Division 1 deal.

“I got into the American recruiting process a bit late,” he said. “They want to look at your game films after your Grade 11 year. I didn’t have that.”

Arcega is currently finishing off his university career highlights tape, which he is hoping to soon get into the hands of CFL scouts.

Arcega admits the defending Grey Cup champion Calgary Stampeders are his favourite CFL club. But he would report to any franchise that drafted him.

“I wouldn’t be able to choose (who selects me),” he said.

Arcega believes he played his best year of university ball in 2018. The Clan, however, had its share of struggles, winning just one of its 10 games.

Arcega does not think SFU’s disappointing record will affect his draft status.

“I think CFL teams are looking at individual talent instead of where teams come from,” he said.

Arcega also believes he has an edge over many other Canadians that would be eligible for the CFL college draft. That’s because while they were playing in the Canadian-based leagues he was suiting up at a higher level in the NCAA Division II ranks.

“We had better competition,” he said. “That gives us a bit of a boost.”

He also believes playing at SFU against American rivals also gives him several other advantages over other Canadian university players.

“I would have an edge in quickness and reaction time,” he said. “And I think I have more knowledge of the game.”

Though he is happy with his performances in his final year at SFU, Arcega did have both ups and downs at the school during his career.

He was a redshirt during his first year at the school, meaning he could practice with the team but did not play in any games. By redshirting, Arcega maintained his four years of university eligibility on the field.

Arcega was also medically redshirted, sitting out the 2017 campaign because of an ankle injury.

Though he has played his final university contest, Arcega is now waiting to see if his game will be good enough to take it to the pro level.

“I still have a passion for it and I want to keep playing,” he said.