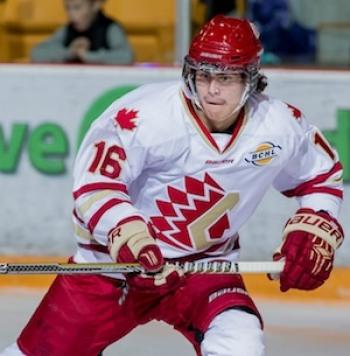 Kale Kane grew up on the Kahnawá:ke reserve

Life is good these days for Kale Kane.

Although still stinging – both mentally and physically - from the rigors of a long playoff run, which ended when his Chilliwack Chiefs fell just two wins shy of a BCHL (British Columbia Hockey League) championship, Kane is thrilled with where he’s at in life, and in hockey.

Kane grew up on the Kahnawá:ke reserve, just 10 kilometers south of Montreal, on the banks of the St. Lawrence River. Hockey has always been his passion. He drove himself to be a better player, and it paid off with an offer to attend Salisbury (Connecticut) Prep School in 2014-15. Kane played on a Connecticut Wolf Pack U-18 team, which won a national title.

It took a lot of hard work to get to this point. “My cousins (Logan and Jonathan Kane) actually went pretty far too, so growing up, I was always looking up to them. I always wanted to go to a prep school and do what they’ve done,” he recalled. “They told me it’s a lot of fun. You meet new people and make a lot of friends. So, I’ve always tried to strive to make it to the next level, college, or whatever is to come.”

Many of Kane’s teammates on the Wolf Pack – Matteo Esposito, Vimal Sukumaran, Jake Smith, Jeremy Germain and Zach Giuttari – joined him on the Chilliwack Chiefs team, which actually began the year with eight former Wolf Pack players (Eric Benshadle and Ben Scharf were traded away during the season).

This group of national champions formed the nucleus of a powerhouse Chilliwack team, which finished with the second-best record in the BCHL. Chilliwack advanced through the first three rounds before dropping the BCHL final in six games to West Kelowna.

“On the ice, I’m kind of a two-way guy,” said Kane. “I like to get into the physical game. I like to score. I like to do everything. That’s what I try to do on the ice for the guys.”

When asked what led to the team’s success this season, Kane quickly points to one main reason.

“In the locker room, everyone liked one another. That’s one big thing. We never really had any problems. Everybody knew we were pretty good. We knew we were good, but we were always trying to be good. We knew what we had to work with on the team,” insisted Kane. “Off the ice, every day, we were hanging out – at my place or someone else’s place. We were always doing stuff.”

While the focus was on winning hockey games, Kane also joined his teammates in the Chilliwack community, attending school events such as Read With The Chiefs.

“Kale has been an instrumental part of our community involvement,” said Barry Douglas, longtime Marketing and Sales Manager for the Chilliwack Chiefs. “He is very popular with the youth and adults and always has a fantastic attitude.”

Kane is adamant his competitive nature has led him to success at every level he plays.

“With hockey and lacrosse, I was a pretty competitive kid, and I always wanted to get better and move on to the next level. You know, you can’t be screwing around with drugs and alcohol. I always figured, stick with sports and keep working hard, and here I am now,” he said.

“I say just try and find something, a sport or a hobby that you just love doing, and see it through. Just try and stay out of trouble. You pick and choose your friends. That’s what I’ve done and I’ve made it this far. Try and get your mind away from all that kind of stuff.”

Kane has accepted a full scholarship to attend the University of Vermont in 2016-17. It’s a place close to his heart, and close to his family back in Kahnawá:ke.

“One of my cousins was actually at Vermont. When I was growing up I would go and watch his games at the old Gutterson Fieldhouse. Always loved it as a kid. So, I’m kind of trying to follow in his footsteps,” said Kane. “Also, it’s just two hours away from my house, and my parents can come and visit and I can easily go home if I want to. It kind of works out good for my family and me.”

Kane will learn from one of the best. Kevin Sneddon is one of only three head coaches to lead the University of Vermont men’s hockey program over the last half century. Sneddon enters his 14th year as the head coach of the Catamounts for 2016-17 year and his 24th year in the coaching profession.

He has led the Catamounts to three NCAA tournament berths in the last eight seasons, including the program's second-ever NCAA Frozen Four berth in 2009. Twelve of Sneddon's former players have signed NHL contracts during his tenure.

“Obviously it would be nice playing in the NHL. I’m trying to go as far as I can, but at the end of the day, I want to graduate with a degree.”