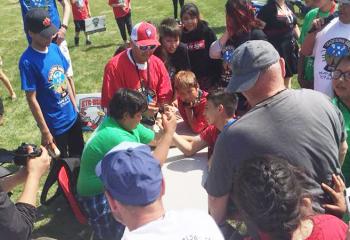 Arm Wrestling at the Traditional Games.

Deen Flett believes he just might be onto something that could potentially spread across Indigenous communities in Canada.

Flett is in his second year of serving as a sports co-ordinator for various First Nation schools in northern Alberta. He helps organize leagues and tournaments in a number of sports for elementary through high school students.

In late May he co-ordinated the inaugural Traditional Games. A total of 88 junior high and senior high school athletes participated in the event staged on the Whitefish Lake First Nation in Atikameg.

These Games were staged to create awareness and promote Indigenous cultures and values in the youth.

Though other competitions, such as the Arctic Winter Games, do offer Indigenous-themed competitions, Flett is unaware of any other events that are held for entrants representing their schools.

“It’s the first time I’ve heard anybody has done something like this in Canada,” he said.

Flett added the Games, which were held May 24, were very well received.

“It was really awesome,” he said. “We had the whole community watching and they absolutely loved it.”

Flett believes it is vital to stage Indigenous-themed games for Indigenous youth.

“They are so important for the kids, for the next generation of kids,” he said.

The activities that students from Grades 7 through Grade 12 competed in included scream and run and triathlon, albeit with some twists.

The scream and run event is just what it sounds like. Participants have a peg in their hand and start screaming and see how far they can run while maintaining a single yell. Once an entrant takes a breath, he/she must stop and place the peg on the ground.

It is then determined how far each competitor ran.

As for the triathlon at these Games, it was not the traditional swim/bike/run event.

Instead, competitors started off with a bit of archery, having to hit three targets. That was followed by a 500-metre run. And it concluded with a 300-metre canoe race.

The Kee Tas Kee Now Tribal Council Education Authority hosted the Games. Though the youth might not have been familiar with the intricacies of some of the activities beforehand, they were by the time they arrived to the Games.

Each of the participating schools had four reps help prepare and then accompany the athletes to the Games.

“When we sent out the posters to the sports reps they were already practicing with the kids,” Flett said. “They had a couple of months of practice.”

Organizers tried to make the event as big of a deal as possible.

“We lit a Traditional Games flame,” Flett said. “It was really awesome. We had music going. We made it really exciting for the kids.”

Flett said it wasn’t just the competitors who were impressed with these inaugural games.

“We actually had people from other schools and other school districts because they thought maybe some day they might like to host it in their community,” he said.

In fact, Flett has already been approached to serve as the host of similar games in another First Nation that he does not work with. But he said he had to turn down that offer because of his own busy work commitments.

He’s already making plans to stage the Traditional Games in Loon River in 2019.

The top three entrants in each event earned points towards their team total at the games in Atikameg.

The host school ended up winning the over-all team title. Cadotte Lake was the runner-up while Peerless Lake finished third and Loon River ended up fourth.

“All four teams were really close in points,” Flett said. “The kids kept checking the board (for updated standings) and they were all saying things like we need to win our next event to move up in points. It was great to see.”

For those in elementary schools he puts together 10 sporting events, one for each month of the academic year.

“The kids keep asking when the next event is,” Flett said. “They want more. They figure a month between events is too long.”