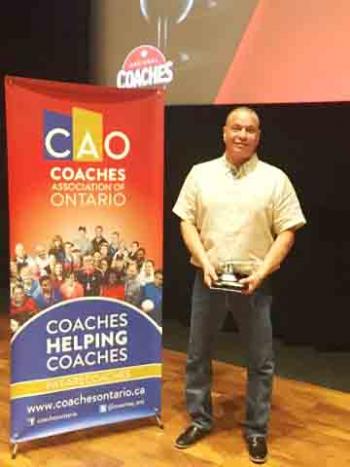 Pat Pembleton was chosen as the Aboriginal impact coach of the year.

A long-time Native lacrosse coach who played a key role in an historic tournament this summer has been honoured with a provincial award.

Pat Pembleton was chosen as the Aboriginal impact coach of the year. He was one of 10 coaches recognized by the Coaches Association of Ontario at a ceremony in Toronto this past Saturday.

The awards ceremony also coincided with the start of National Coaches Week, which began Sept. 23 and continues until Sept. 30.

Pembleton, a Mohawk who was born and raised in the Six Nations community of Ohsweken, now lives in Fort Erie, Ont.

“It means a lot to me getting recognized for a lot of hard work I’ve put in,” the 53-year-old Pembleton said. “But I was just passing on the game that was passed on to me.”

A career highlight for Pembleton occurred this past July when he served as the head coach for the Ontario girls’ under-19 squad that participated at the North American Indigenous Games (NAIG).

It marked the first time girls lacrosse had been included at the NAIG. This year’s multi-sport competition was staged in Toronto and surrounding communities.

Pembleton guided the Ontario team to a silver medal. His charges were edged 4-3 by the Quebec-based side called Eastern Door and the North in the championship final.

Six clubs competed in the girls’ under-19 division. It was the only age group for girls’ lacrosse at this year’s NAIG.

“That was great,” Pembleton said of his NAIG involvement. “It was an experience I’ll never forget. The best thing I liked about it was that we only had five weeks to prepare the team. All the other teams had a lot longer to get ready.”

Besides capturing the silver medal at the NAIG, Pembleton said he was pleased Ontario was able to defeat the squad from British Columbia, a pre-tournament favourite, in its round-robin match. That contest was historic as it was the first female one at NAIG. British Columbia ended up winning the bronze medal in the tournament.

Pembleton has been coaching since the mid-90s. He was a member of the New York-based Tuscarora Thunderhawks who won the Presidents Cup, the Canadian Senior B men’s box lacrosse championship, in 1994. The Thunderhawks competed in the Can-Am Senior B Lacrosse League.

After winning the national title in ’94, Pembleton kicked off his coaching career. He was a player/coach with the Thunderhawks during the next two years.

Pembleton, who started playing lacrosse when he was about six, spent the majority of his youth career suiting up for teams in Six Nations. But he did play one season in the Junior B ranks with the Niagara-on-the-Lake Warriors. He went on to play his entire Senior B career with the Thunderhawks.

Besides Tuscarora, Pembleton has also coached a half dozen other squads in the Can-Am circuit, including the Tonawanda Braves, a franchise he continues to be the head coach of. And during the past five years Pembleton has also been coaching females in the Ontario Women’s Box Lacrosse League.

For starters, he was the bench boss of the Niagara Turtle Islanders for three seasons, including its championship campaign in 2015. And for the past two years he’s been the head coach of the Grand River Attack, who were crowned league champs this season.

Pembleton continues to coach despite suffering a heart attack in October in 2014 and another one in March of 2015.

“There’s no stress for me when I’m coaching,” he said. “It helps when you have a team that wants to learn.”

Pembleton, however, continues to be on a medical leave, awaiting clearance from his doctor, in order to return to his job as a union laborer in Buffalo. Pembleton added he does not have a preference of coaching females or males.

“It’s hard to say which I like better,” he said. “But I think it’s easier coaching with women because they are just starting up with box lacrosse. A lot of the men are set in their own ways.”

Though he’s coached numerous teams in Canada and the United States, Pembleton has never been involved with a pro franchise. He’d welcome the opportunity to coach in the professional National Lacrosse League.

“That would be a dream of mine,” he said. “If it happens that would be great. And if doesn’t happen I’m fine with where I’m at.”

Pembleton has never applied for a job in the NLL. And he’s not sure whether a squad in the league will come calling for his services at some point.