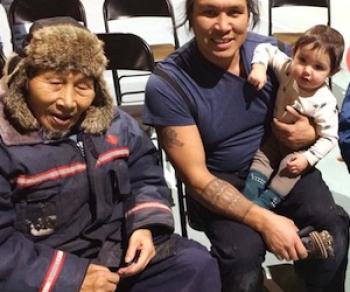 The Banff Center for the Arts has a special guest coming around for this year’s National Aboriginal Day celebration. The Centre has chosen to spotlight the Inuit people for its three-day event, beginning June 20.

Along with screening films based on the Inuit Arctic experience, they will hold workshops about Inuit history and culture, led by Johnny Issaluk.

“I was 16 when I started competing in Arctic traditional games… There’s agility games, strength games, and endurance games. When I started there were seven communities that would come together and compete for a week, with different categories for men, women, juniors, and Elders,” said Issaluk.

He was born in Churchill, Man., but spent most of his life in Chesterfield Inlet. Traditional Inuit culture was a major influence. He shot his first caribou when he was five years old, and built his first igloo at age 12.

Being involved in the traditional games was a natural next step for him, especially given his strong build and above-average height as a young man.

According to Issaluk, these games were created specifically to keep the human body healthy and functioning well throughout the year, despite life in a harsh, cold climate, and particularly during the torment of winter.

“The agility games make your body flexible and agile, because back in the day they used to chase animals by foot and catch them with knives and harpoons. You need to be agile because its’s very rough,” said Issaluk.

“And the endurance games… They used to walk for days to get to where the animals were and chase them by foot… You had to be at the top of your game all the time in order to survive. If you didn’t survive… if you didn’t catch animals… the family and village would starve,” he said, adding that the strength games were simply to build muscle in a hunter’s body.

Issaluk’s three chosen demonstration games for his Banff Center workshop are the “high kick,” the “head pull,” and the “knuckle hop.” For each game, a number of opponents would be competing against one another.

During the high kick, a target of some kind is chosen and participants must jump up and kick the target, then land on the same foot they kicked the target with. The person who kicks the highest target is the winner.

For the head pull, two opponents are strapped together just above their ears, while down on all fours on the ground, and the winner is the one who pulls the other person over a target line.

Lastly, the knuckle hop is a game where the competitors have their elbows pulled in next to their bodies, and they “hop like a seal” on their knuckles and toes as far as they can. The winner is the person who can go the farthest distance in that position.

Issaluk said he’s enjoyed participating in all of them, and he’s won more than 200 medals in his two-decade professional career.

“I played all of them, and I did well at them. But now I don’t play anymore, I just teach and coach. I teach whoever wants to learn… I think it’s important to learn Inuit culture and keep it alive. It’s strong in different places, but like everything else, it’s getting modernised,” he said.

For more information about the Banff Center’s National Aboriginal Day celebration, go to