Hitmen will bring hope and opportunity when they visit Siksika 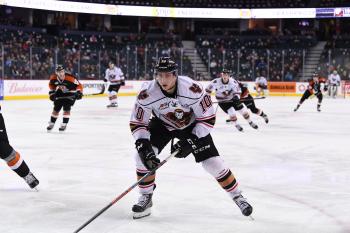 Josh Prokop and his Calgary Hitmen teammates will stage a practice at the Siksika Nation Jan. 15. Photo courtesy of Calgary Hitmen

“Having the Calgary Hitmen reach out to us makes a big difference. This experience transcends hockey and can lift up an entire community.” —Tyler White, CEO of Siksika Health Services
By Sam Laskaris
Windspeaker Contributor
SIKSIKA NATION, Alta.

The Western Hockey League’s Calgary Hitmen are moving to Siksika Nation. Well, at least for one day.

The Hitmen, one of 22 franchises that compete in the WHL, will be staging their Jan. 15 practice at the First Nation located in southern Alberta, about an hour’s drive southeast of Calgary.

“We are excited and honoured to host the Calgary Hitmen at Siksika Nation,” said Tyler White, the CEO of Siksika Health Services who played an instrumental role in bringing the hockey squad to the First Nation.

“Not only does it bring hope and opportunity for our community but also provides education and understanding for the Calgary Hitmen organization and players. I believe we both will benefit and establish ongoing relationships as a result.”

This marks the first time a WHL franchise has visited the Siksika Nation. And it couldn’t have come at a better time.

“The Nation is experiencing some challenging times in addressing social issues,” White said. “Having the Calgary Hitmen reach out to us makes a big difference. This experience transcends hockey and can lift up an entire community.”

The practice in Siksika Nation will be free and open to all.

Members of Siksika’s minor hockey program will have the opportunity to skate with the Hitmen players.

Meanwhile, while the practice is going on, coaches from the Siksika hockey association will have the opportunity to attend a Q and A session with members of the Hitmen brass.

Members of the Calgary squad that will attend the session are Hitmen general manager Jeff Chynoweth and vice-president Mike Moore. The session will be moderated by Rob Kerr, the Hitmen assistant manager of business operations.

“I’m sure there will be lots of questions from both groups which is part of building relationships and supporting each other,” White said.

Kerr explained why the information session for Siksika Nation coaches was added.

“They have a robust minor hockey program,” Kerr said. “But some of their coaches haven’t played hockey before or are new to coaching. This Q and A session will allow them to bounce off some ideas from hockey people.”

Kerr said he’s not sure how many Siksika Nation residents are already Hitmen fans.

“We’re about to find out,” he said. “Part of it is getting out there and engaging with some new fans.

Four other WHL franchises are also based in Alberta. They are the Edmonton Oil Kings, Red Deer Rebels, Medicine Hat Tigers and Lethbridge Hurricanes.

Plus, there are 16 franchises in the Alberta Junior Hockey League.

White is confident having the Hitmen visit his community for one day will be a huge success.

“It’s a leap of faith for both of us but we strongly believe in the positive and long lasting impacts that it will create,” he said.