Goaltender passing along her knowledge as apprentice coach 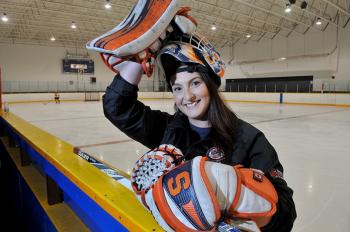 “I wanted to keep playing. Unfortunately for women’s hockey there’s not a lot of options that make economic sense.” — Jennifer Gilligan
By Sam Laskaris

Though she’s no longer the last line of defense for her hockey clubs, Jennifer Gilligan still finds their games nerve wracking.

That’s because the 25-year-old former goaltender, who has Mi’kmaq and Cherokee ancestry through her mother Carla, is in the coaching ranks, passing on her knowledge to various squads.

One of the teams that Gilligan is currently involved with is the British Columbia girls’ under-18 squad.

The club will compete at the 2019 Canada Winter Games. This event, being held in Red Deer, Alta., is scheduled to begin on Feb. 23 and continue until March 3.

“I actually get more nervous coaching than I did playing,” said Gilligan, who retired in 2016, after her final season in the NCAA ranks with New York’s Syracuse University.

“As a coach there’s nothing you can do on the ice except comment on what you see. When I was playing I at least had control of my own play. So I find coaching a little more nerve wracking.”

Gilligan, who lives in Maple Ridge, B.C., was named to the B.C. staff via the Aboriginal Apprentice Coach Program. This venture allows each province that is participating at the Canada Winter Games to have a maximum of two Indigenous apprentice coaches added to staffs.

Curtis Smecher, an archery coach from Abbotsford, will serve as British Columbia’s other Aboriginal apprentice coach at next year’s Canada Winter Games.

Gilligan had applied for the program in the fall of 2017. She received confirmation this past January that she had been chosen to take part.

Since being named to the B.C. coaching staff, Gilligan has attended a pair of the team’s selection camps, held in Salmon Arm and Shawinigan Lake.

She’ll also participate in the club’s final selection camp. A total of 26 players have been invited to that event, set for Dec. 20 to Dec. 23 in Penticton.

The squad’s final roster will be chosen after this camp.

“The final cuts are always a little tough,” Gilligan said. “At that point the girls are so close and you can flip a coin to pick a kid.”

Gilligan said she is pleased with how the team is shaping up and she anticipates it will fare well at the Red Deer tournament.

“We have some skill,” she said. “And we have some grit. We have a little bit of everything.”

Gilligan though is not quite sure what will be expected of her while she’s at the Canada Winter Games.

“I don’t necessarily know what my complete role will entail,” she said. “As far as I know I’ll be doing a little bit of everything.”

Gilligan believes her duties might include doing some stats or video work for the club.

“I’m kind of there for the experience,” she said. “It’s going to be exciting.”

Gilligan does not anticipate being on the bench with the B.C. team.

Gilligan started to focus on her coaching career after her final season at Syracuse.

“I wanted to keep playing,” she said. “Unfortunately for women’s hockey there’s not a lot of options that make economic sense.”

Many of Gilligan’s university teammates and rivals are toiling in these leagues now. But they must also secure some other type of work since lucrative salaries are not available in these circuits.

Gilligan now finds herself working in her second season as the assistant coach for the female Varsity team at the Delta Hockey Academy in Delta, B.C.

This squad participates in the Canadian Sport School Hockey League.

Gilligan is also currently working with a couple of other teams as well.