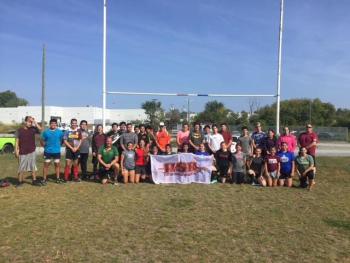 Indigenous athletes from New Brunswick are expecting to greatly benefit thanks to a new partnership with the Canadian Sport Centre Atlantic (CSCA).

Earlier this week officials from the Aboriginal Sport and Recreation New Brunswick announced their partnership with CSCA.

As part of the deal, athletes from the New Brunswick-based Indigenous Spruce Rugby Program will also be able to take advantage of the elite training.

By working with various sports organizations, the CSCA, which has facilities in each of the four eastern Canadian provinces, aims to support the development and performances of athletes and coaches in Atlantic Canada.

Those efforts have led to numerous outstanding efforts from Atlantic Canada athletes in various national and international competitions in numerous sports.

Jason Peters, the chief executive officer for Aboriginal Sports and Recreation New Brunswick, is thrilled with the new deal.

“It’s really going to benefit our youth,” he said.

About 125 athletes from the province are expected to take advantage of the deal. These youth will work closely with the staff from the CSCA’s facility in Fredericton.

One of the best parts of the deal is the cost. Athletes will only be charged $25 each per year for all of the CSCA’s services.

“It’s worth its weight in gold, especially for those athletes that want to go on and play at a higher level like a university sport or Major Junior hockey,” Peters said.

For example, both the New Brunswick female and male squads failed to win a game at the NAHC held earlier this month. Both clubs lost all five of their matches.

In previous years New Brunswick players had suited up for Team Atlantic. But officials from the province opted to ice their own squads this year, much to the dismay of some representatives from other entrants.

“They didn’t think it was a move in the right direction,” Peters said. “But my board was quite supportive of it as it will offer more of our youth an opportunity.”

In the past Peters said New Brunswick typically had about 15 players total on the two Atlantic clubs at the NAHC.

But now that they have their own teams, each year New Brunswick will be represented by 22 female and 22 male players.

Plus the coaching staffs – up to four individuals per squad on the bench – and the general managers will all be from New Brunswick.

“It gives more of our people the chance to be a coach or a general manager at a national championship,” Peters said.

The only Canadian province that New Brunswick finished ahead of in the medal standings, was P.E.I., which earned three medals.

“Our individual sports are performing very well (at NAIG) but we’re struggling with our team sports, partly because of the size of our province,” Peters said.

He believes with the CSCA deal in place now, New Brunswick athletes and teams will improve their performances at future events.

Ken Bagnell, the president of the CSCA, said this isn’t the first time his association has worked with a provincial Indigenous sporting body.

A year ago the CSCA had worked with Nova Scotia athletes prior to the NAIG.

A deal is not currently in place to continue working with Nova Scotia athletes. But Bagnell is confident an agreement will be reached. And he also believes deals with Indigenous sporting bodies from P.E.I. and Newfoundland will also occur in the near future.

“It’s a pilot effort we’re doing that is really unique to eastern Canada,” Bagnell said. “It is new and it is a great partnership. And because of the people we are working with we are confident it will be a great success.”