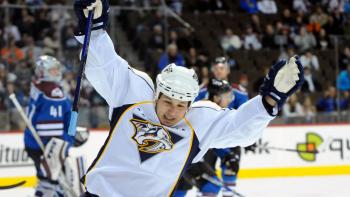 Officials from Alberta’s Portage College are thrilled with the guest speakers they’ve lined up for their major fundraiser. A pair of Indigenous players – Rene Bourque and Jordin Tootoo – who both starred in the National Hockey League, will headline the school’s 19th annual student scholarship fundraising dinner.

The event is scheduled for April 6 at the college’s Lac La Biche campus. Portage College also has six other campuses throughout Alberta.

The college’s annual fundraiser was originally held to raise funds to award scholarships to student athletes at the school. This marks the third year, however, all Portage College students will be eligible to benefit from scholarships that will be funded with money raised from the dinner.

Organizers are hoping to raise at least $40,000 from April’s event.

“Every year now we decide which scholarships the money will go into,” said Rick Flumian, the college’s manager of community relations. Having both Bourque and Tootoo speak at the fundraiser should translate into an event that is well attended.

“It’s going to be a big draw,” Flumian said.

Both players announced their retirement from pro hockey in the past year. Bourque, who is Metis, is from Lac La Biche and already well known in the community. He’s been involved with numerous charitable efforts in his hometown.

As for Tootoo, he’s considered a bit of a trailblazer in pro hockey. Not only was he the first Inuk to make it to the NHL, but he’s also the first individual who grew up in Nunavut to play in the league.

Bourque and Tootoo will not be the first Indigenous athletes to take part. Previous headliners also included Bryan Trottier, a seven-time Stanley Cup champion, and Theo Fleury, who helped the Calgary Flames win the league crown in 1989.

Trottier has Metis, Cree and Chippewa ancestry, while Fleury is Metis.

Because the school’s annual fundraiser is held in April, Flumian said it is difficult to bring current pros to town.

“Guys are still playing in the NHL in April and they might be in their playoffs,” he said.

Flumian said most years the fundraiser attracts between 280 and 350 attendees.

“We’re always reaching out to different players to see if they could be a good fit for us,” he said.

Flumian is thrilled both Bourque and Tootoo were able to fit the fundraiser into their schedules this year.

“Our college really exists because our nearby Indigenous communities staged a sit in,” Flumian added. Portage College was originally called Alberta NewStart. It was established in 1968 as part of a Canadian government initiative to research basic adult education.

A government attempt to close the facility shortly after it opened was not met favourably by Indigenous students who staged the sit in.

Government officials had a change of heart and the program continued. The school’s named was changed to Portage College in 1998.

Bourque, 37, had played his junior hockey in Alberta. He spent the 1999-2000 campaign starring with the St. Albert Saints in the Alberta Junior Hockey League.

He then spent four years playing at the University of Wisconsin. He was the captain of the squad in his senior season.

Last year, his final season as a pro, Bourque played in Sweden for Djurgardens. He was also a member of the Canadian men’s squad that captured the bronze medal at the 2018 Pyeongchang Olympics in South Korea.

As for Tootoo, he played in 765 NHL matches. He toiled for the Nashville Predators, Detroit Red Wings, New Jersey Devils and Chicago.

April’s event will also include both a live auction and a silent auction.

Both Bourque and Tootoo will also attend another event in Lac La Biche the day before the Portage College fundraiser. Students from four high schools have been invited to come listen to both ex-pros discuss their life stories.

That event will include a question and answer session, as well as opportunities for the high school students to get some autographs from the former players.