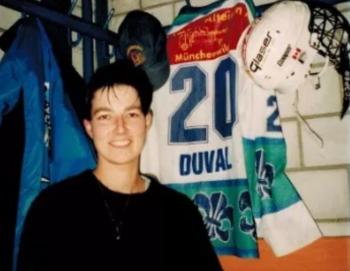 Liz Duval, the only female from Canada inducted into the North American Indigenous Athletics Hall of Fame in its inaugural year.

“As a female athlete you don’t really do sports thinking anything beyond the day-to-day excitement of a sport.” —Hall of Famer Liz Duval
By Sam Laskaris
Local Journalism Initiative Reporter
Windspeaker.com

Liz Duval hasn’t laced up the skates to play even recreational hockey for several years now.

But the 50-year-old Métis woman continues to be recognized for her hockey exploits from a few decades ago.

It was announced earlier this month that Duval, who lives in Hamilton, Ont., is one of the inaugural inductees into the North American Indigenous Athletics Hall of Fame.

A total of 60 inductees, via six categories, are among the inaugural class for the hall of fame, which will be a digital one and can be viewed here: https://www.naiahf.org/

Duval, who was born in Penetanguishene, Ont., is the only female from Canada to enter the hall this year as a hockey player.

But this isn’t the first time she’s been inducted into a hall of fame.

For starters, she was inducted into her hometown Penetang Sports Hall of Fame back in 2009.

And then in 2016, the entire Guelph Gryphons women’s hockey team from the 1994-95 season, was inducted into university’s sports hall of fame. The club had won its provincial title that year.

“This is a whole other thing,” Duval said of her latest accolade. “Recognition at the North America level is amazing.”

Duval said she was nominated for the North American hall by Bert Mason, who is not only a fellow Penetang Sports Hall of Fame inductee but a hall board member as well.

“It seems it’s very inclusive,” Duval said of the newest hall of fame. “And it seems they want to celebrate sports and accomplishments.”

Besides athletes, inaugural inductees were selected in five other categories. They were Coaches, Builders, Media, Officials and Teams.

Duval started playing hockey at the age of 10. Since there were no girls’ teams in her hometown, she was placed on a boys’ squad in her local hockey association.

Duval, who was a centre, went on to play five seasons with the University of Guelph. She served as the team captain during her final three years with the squad.

Duval went on to play in the then highest-calibre level of women’s hockey in the country with a Mississauga club in the Central Ontario Women’s Hockey League.

Duval also played semi-pro hockey for one season, 1997-98, with a squad in Switzerland called DHC Lyss.

Duval said elite women’s hockey players from her era didn’t receive the same recognition some females get these days.

“It was different times back then,” said Duval, who works as a regional advisor for the Ministry of Heritage, Sport, Tourism and Culture Industries. “We didn’t have the exposure back then.”

And early on in her career Duval said she certainly wasn’t thinking about the possibility of being inducted into any halls of fame.

“As a female athlete you don’t really do sports thinking anything beyond the day-to-day excitement of a sport,” she said.

Other inaugural inductees include the late Jim Neilson, who played in the National Hockey League, Craig Berube, the head coach of the NHL’s St. Louis Blues, and the women’s 2015 National Indian Football Association (NIFA) team.

During his rookie NHL season, Neilson was a runner-up for the Norris Trophy, annually awarded to the league’s top defenceman. The legendary Bobby Orr was the trophy’s recipient that season.

Neilson, who was a member of the Big River First Nation in Saskatchewan, also played two years with the California Golden Seals and another two seasons with the franchise when it relocated to Ohio and became the Cleveland Barons.

Neilson, inducted into the hall via the Players category, appeared in 1,088 NHL contests, earning 386 points, including 71 goals.

As for Berube, who is Cree and from Calahoo, Alta., he also had a lengthy NHL playing career which lasted 18 seasons but he was inducted via the Coaches category.

Berube, a forward, was primarily known for his toughness. He racked up a career high 305 penalty minutes during the 1993-94 season with Washington.

Upon his retirement, Berube turned to coaching. He was the head coach for the St. Louis Blues when they captured the Stanley Cup in 2019.

As for Canada’s NIFA entry, it captured the gold medal in the women’s soccer competition at the inaugural World Indigenous Games held in Brazil.

That multi-sport event featured more than 2,000 athletes from 30 countries.

The NIFA squad played six matches at the Games and edged the host Brazilians 1-0 in front of 10,000 fans in the championship final, which was decided in penalty kicks.