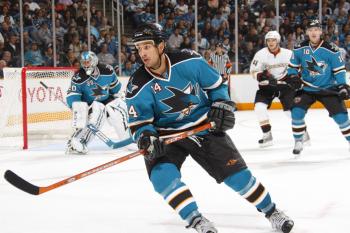 “It’s good to be able to give back.” — Jonathan Cheechoo
By Sam Laskaris
Windspeaker.com Contributor
MOOSE CREE FIRST NATION, Ont.

Back in the late 1980s and early ‘90s Jonathan Cheechoo often found himself at the local rink in his northern Ontario community of Moose Factory chasing his hockey dreams.

Cheechoo, a member of the Moose Cree First Nation, went on to play 560 National Hockey League (NHL) contests, mostly with the San Jose Sharks, during his 17-season pro career.

Cheechoo, who is now 39, recently returned to his hometown rink, the Thomas Cheechoo Jr. Memorial Complex, named after a distant relative. He was there to pass on his knowledge of the sport to those in the community now pursuing their own dreams.

Cheechoo spent four days providing free on-ice instruction at the camp. About 115 youth ages 17 and under took advantage of the free camp.

“It’s good to be able to give back,” said Cheechoo of the camp, which wrapped up on Jan. 31.

Cheechoo currently lives in San Jose, Calif. with his wife Ashley and their eight-year-old son Jack.

This marked the second straight year that Cheechoo was featured at the free hockey camp in his First Nation.

“It’s great I can share my joy with them,” said Cheechoo, who retired in 2017 after spending the final four years of his pro career in the Kontinental Hockey League, a circuit which primarily features teams from Russia but also includes entrants from Belarus, China, Finland, Kazakhstan and Latvia. “If they want me to I’ll keep doing it.”

Cheechoo’s younger brother Jordan, also a former player, was an instructor at the camp as well.

During his junior career, however, he played in the Ontario Hockey League (OHL) with the Sudbury Wolves and the Windsor Spitfires. He also had a stint with the Gatineau Olympiques in the Quebec Major Junior Hockey League.

Jordan though spent the majority of his junior days toiling with the Sudbury entry in the Northern Ontario Junior Hockey League.

He is now the head coach of the Midget Varsity boys’ squad at the Prairie Hockey Academy, based in Moose Jaw, Sask.

“He comes out and helps because he knows all the kids,” Jonathan said.

In recent years Jonathan has only been able to make it to his home community about once a year.

But he’s expected to visit more often now that his parents, who spent about 16 years living near Sudbury, have moved back to the Moose Cree First Nation. The couple returned home last year after father Mervin was elected chief.

“My grandfather is still there,” Jonathan added. “And I have about five or six uncles and aunts that live there as well.”

While he was growing up, Cheechoo recalled that a former NHLer had been a featured instructor at a hockey camp that he attended in Moose Factory.

“When I was 12 Ted Nolan came up and ran a hockey school,” Cheechoo said. “I really enjoyed that.”

Besides playing in the NHL, Nolan also went on to coach in the league with the Hartford Whalers, Buffalo Sabres and New York Islanders.

Cheechoo recalls Nolan’s words of wisdom that he passed on when he was a pre-teen. He said the young players would eventually have to leave their home community if they were interested in furthering their hockey careers.

Cheechoo did just that, moving to southern Ontario at age 16 to play Junior B hockey with the Kitchener Dutchmen.

Cheechoo then played three seasons in the OHL with the Belleville Bulls before turning pro.

Cheechoo’s best season in the NHL was during the 2005-06 campaign. He scored a league-high 56 goals and won the Maurice (Rocket) Richard Trophy. Cheechoo added 37 assists that year to finish with 93 points in 82 regular season contests.

Cheechoo is currently coaching a San Jose house league team, which includes his son Jack. That club is part of the San Jose Jr. Sharks program.

For now, Cheechoo said he is content helping out in the youth ranks. In the future, however, he might seek a return to the pro ranks, perhaps even in the NHL with San Jose.

“It’s something I’ve looked at,” he said. “It would have to be the right situation.”

Cheechoo said he would consider working as a scout or in a player development role. Ideally, however, he wouldn’t want a position that would involve plenty of travel or life on the road as he feels he already lost tons of quality family time chasing his own hockey dreams over the years.