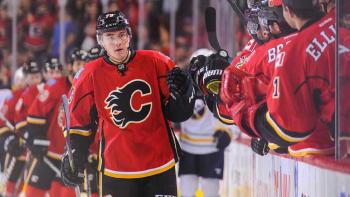 Micheal Ferland is a strong scorer for the Calgary Flames. Photo courtesy nhl.com

There’s still a handful of Indigenous players who are playing key roles with their National Hockey League squads, but there’s not as many Indigenous athletes in the league as there were last season.

Just five Indigenous players were listed on the opening day rosters as the NHL kicked off its 2017-18 regular season campaign last week.

Jordin Tootoo, the first Inuk to play in the NHL, is still officially a member of the Chicago Blackhawks, but the 34-year-old forward, who has appeared in 765 NHL contests with four franchises, was on Chicago’s long-term injured reserve list with an undisclosed upper-body injury, at the start of the current campaign. No timetable has been set for his return.

No doubt Tootoo, 34, is hoping he’ll return to action and add to his NHL totals. In his 765 NHL games he has earned 171 points, including 68 goals.

Another long-time NHL player, Vern Fiddler, will not be returning to any action, because Fiddler, a 37-year-old Métis who appeared in 928 NHL matches during his pro career, retired during the off-season.

Fiddler had split last season between New Jersey and Nashville. During his pro career, which began in 2001, Fiddler also suited up for the Dallas Stars and Phoenix (now renamed Arizona) Coyotes.

A couple of other Indigenous players who were in the NHL last season—forwards Dwight King and Rene Bourque—have both decided to take their talents abroad this year.

King, who is Métis, split his time between the Los Angeles Kings and Montreal last season. King, who won two Stanley Cup championships with the Kings, is now 28 and is toiling with Avtomobolist Yakaterinburg, a Russian-based squad in the Kontinental Hockey League.

Bourque, a 35-year-old Métis who was a member of the Colorado Avalanche a year ago, is now in Sweden. He’s a member of Djurgardens IF, one of Sweden’s most storied franchises.

It remains to be seen whether King or Bourque will eventually return to the NHL or if they finish their careers overseas.

A closer look at the five active Indigenous NHL players at the start of the current season follows.

Jordan Nolan: The son of former NHL player and coach Ted Nolan, Jordan is also a two-time Stanley Cup champion. Like King, he too was a member of the Los Angeles championship squads in 2012 and ’14. But Nolan has a new home this year. The 28-year-old Ojibwe, who is in his eighth pro season, was waived by the Kings in late September. Buffalo acquired his rights the next day.

T.J. Oshie: A 30-year-old Ojibwe, Oshie has blossomed into one of the NHL’s top goal scorers. Last season he collected 33 goals and added 23 assists for 56 points in 68 regular season contests with the Capitals. He then averaged almost a point per game, racking up 12 points, including four goals, in 13 playoff matches. Oshie has kept up his torrid pace this season, earning three goals in his first three games.

Micheal Ferland: A 25-year-old Cree, who was born in Swan River, Man., proved he could be a decent NHL scorer this past year. Ferland netted 15 goals for the Flames, tying for fifth place among Calgary goal scorers. Now in his fifth pro campaign, Ferland had appeared in 186 NHL games entering this season, all with the Flames.

Brandon Montour: The 23-year-old blueliner who grew up in the Six Nations community of Ohsweken, is hoping this is his first full season in the NHL. Montour, now a third-year pro, began last season with the American Hockey League’s San Diego Gulls before being recalled by the Ducks. He ended up appearing in 27 regular season games with Anaheim and all 17 of its playoff matches.

Carey Price: Price, a member of British Columbia’s Ulkatcho First Nation, is still considered one of the NHL’s top goaltenders. Price, who turned pro in 2007, has spent his entire career with the Montreal organization. Though a Stanley Cup has eluded him thus far, in 2015 Price did capture the Hart Trophy, annually awarded to the NHL’s most valuable player.