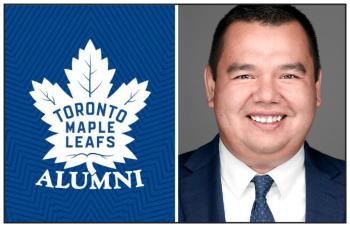 “Our people have learned and succeeded in so many ways as a result of hockey. The process of discipline and aspiring to achieve the best continues to help ground our children, youth and families in their daily lives.” — Rachel Manitowabi, the chief of Wiikwemkoong Unceded Territory
By Sam Laskaris
Local Journalism Initiative Reporter
Windspeaker.com

Derek Archibald will still be playing recreational hockey next week.

But the deputy chief of Taykwa Tagamou Nation in northern Ontario could very well be showcasing his talents among several ex-pros this weekend.

That’s because Archibald, who is 32, might suit up in a special exhibition contest that his First Nation is hosting on Sunday.

The Toronto Maple Leafs alumni squad will be facing off in a match this Sunday that also will include representatives from the Taykwa Tagamou Nation and surrounding areas.

The match, which is scheduled to begin at 5 p.m., will be staged at the Tim Hortons Centre in Cochrane, Ont.

The Maple Leafs alumni will also participate in a contest this Saturday at the Thunderdome Arena located on Wiikwemkoong Unceded Territory. That game has a 7 p.m. faceoff.

Both matches are supported by Indigenous Tourism Ontario, which is looking to boost Indigenous sport tourism in the province.

Twenty ex-pros who played with the Maple Leafs are expected to participate in the two games.

For both matches the former National Hockey League players will be divided into two squads. Rosters for both clubs will then be filled in by local skaters.

Archibald, who is heavily involved in hockey, said he will decide by Friday whether he himself will lace up the skates for Sunday’s game.

Besides playing rec hockey twice a week, Archibald is also the associate coach for the Cochrane Crunch, a Junior A team that competes in the Northern Ontario Junior Hockey League. He’s also an assistant coach for a Cochrane boys’ Under-15 squad.

“I’m a big fan of the Leafs,” Archibald said. “I grew up watching them.”

If he does play on Sunday, Archibald, a forward, is hoping to see some time on a line with Shayne Corson, his favourite of the former pros making the northern Ontario trip.

“We’re a Leafs Nation,” Archibald said. “We couldn’t be more excited to have these players come here. This game will be special to us. Most of us grew up watching the Leafs. We feel this event will be something special. It will create memories that last.”

Local players that will be suiting up for Sunday’s game are all 18 and over. Archibald said individuals who were keen to take part in the game submitted short videos of why they wanted to do so.

Some of the participating players will be members of the Crunch team that Archibald coaches.

There is no admission fee for either of the weekend games. But those looking to attend must register to do so.

Archibald is anticipating a sellout of 700 spectators for Sunday’s game.

He’s also hoping those that do show up help out with a pair of fundraisers.

Fans are asked to bring non-perishable food items that will be donated to the Cochrane Food Bank. Monetary donations are also being accepted.
“We’re hoping to raise at least $10,000 for the food bank,” Archibald said.

A silent auction will also be held in conjunction with the Sunday game. About 30 items will be up for grabs, including a pair of platinum seats for the Maple Leafs’ Jan. 7 home game versus the Detroit Red Wings as well as two nights of hotel accommodation in Toronto.

Archibald is hoping the silent auction raises about $50,000. Funds will go towards youth recreational programming in Taykwa Tagamou Nation.

Rachel Manitowabi, the chief of Wiikwemkoong Unceded Territory, is obviously thrilled one of the weekend games will be staged in her community.

“Hockey has contributed to individual growth, as well as overall community growth,” she said. “Our people have learned and succeeded in so many ways as a result of hockey. The process of discipline and aspiring to achieve the best continues to help ground our children, youth and families in their daily lives by providing the avenue for overall pride, confidence and teamwork. Hockey can empower. Empowered youth empowers communities which empowers our Indigenous nations as a whole.”

The alumni association for the Toronto franchise is the NHL’s largest and most active one.