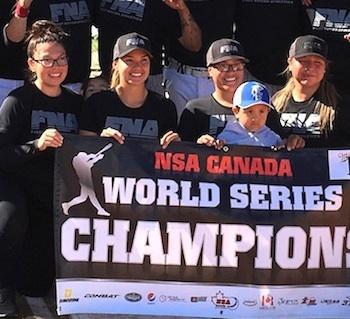 Billy Gorrell’s idea of forming a powerhouse team has paid off, and now Gorrell can boast that he is a World Series champion.

Gorrell, who is the president of First Nation Athletics apparel, thought it would be a wise move to take players from a pair of successful Native slo-pitch teams and combine them into one squad.

The result is the FNA Elite, an organization that includes a men’s team, a women’s club and a mixed squad.

The FNA Elite mixed team captured the title at this year’s Native World Series, which concluded this past Sunday in Whitecourt, Alta.

Besides serving as the team’s manager, Gorrell is also a pitcher for the championship squad.

The Alexis Nakota Sioux Nation hosted the 24-team tournament. The event primarily featured clubs from Alberta, but there were also two entrants from Saskatchewan and one from the Northwest Territories.

Gorrell, however, said team members prefer another aspect of their championship.

“Definitely the prestige is more important,” he said. “I know everybody loves the fact they can say they are a World Series champion. And that feels good.”

For Gorrell, this marked the first time he participated in the Native World Series. This event is one of the main tournaments the FNA Elites will compete in during 2016.

This year the organization consists of 24 male players and 22 female players. The plan is to take these players to various tournaments throughout Canada and in the United States.

Due to family and work commitments and roster limitations, not all players attend all tournaments.

“They’re proud to be an FNA athlete,” Gorrell said. “And they wear their FNA gear. But we really encourage our players to go and play for other teams in other places as well.”

The FNA Elites had kicked off their 2016 campaign by placing second at a May tournament in Leduc, Alta. The squad also placed fourth at an event in Kamloops, B.C. in June.

At the Native World Series, the FNA Elites won all seven of their matches in the double knockout tournament.

As the tourney was drawing to a close the only two undefeated entrants were the Elites and a club called Legit, comprised of players from Edmonton and surrounding areas.

The Elites won the first matchup between these two sides by a 30-29 score. The tournament featured seven-inning games but that contest required four additional innings to break deadlocked scores.

Since that was the first loss for the Legit squad, the two rivals had to square off once again.

A Legit victory would have necessitated yet another match since that would have been the Elite’s first loss. But that was not required as the Elite was able to squeeze out a 25-24 triumph and win the championship.

Gorrell said he knew he had plenty of talent on the FNA Elite side. And he was obviously hoping for plenty of success.

Gorrell is hoping to take the FNA Elite to the USA Co-Ed Fall World Series, set for mid-November in Mesquite, Nevada.

“We really feel we have the team to go down there play well and win it,” he said.

Meanwhile, this marked the first year the Alexis Nakota Sioux Nation hosted the Native World Series. Alberta’s Tsuu T’ina Nation had hosted the tournament the previous 11 years, but it opted to hold another event this year instead.

That prompted officials from the Alexis Nakota Sioux Nation to step up and host this year, but they only took over the event in March.

“There was a lot of work to do, especially in the last couple of weeks,” said Rene Letendre, one of six individuals that made up the organizing committee. “But it turned out pretty well for it the first time here.”

Letendre said her First Nation would be interested in hosting the event again. But if it does it would want to find another location with some bigger diamonds. Matches at this year’s event were held on six diamonds in Whitecourt.

Letendre felt the top prize money of $10,000 was a big attraction. 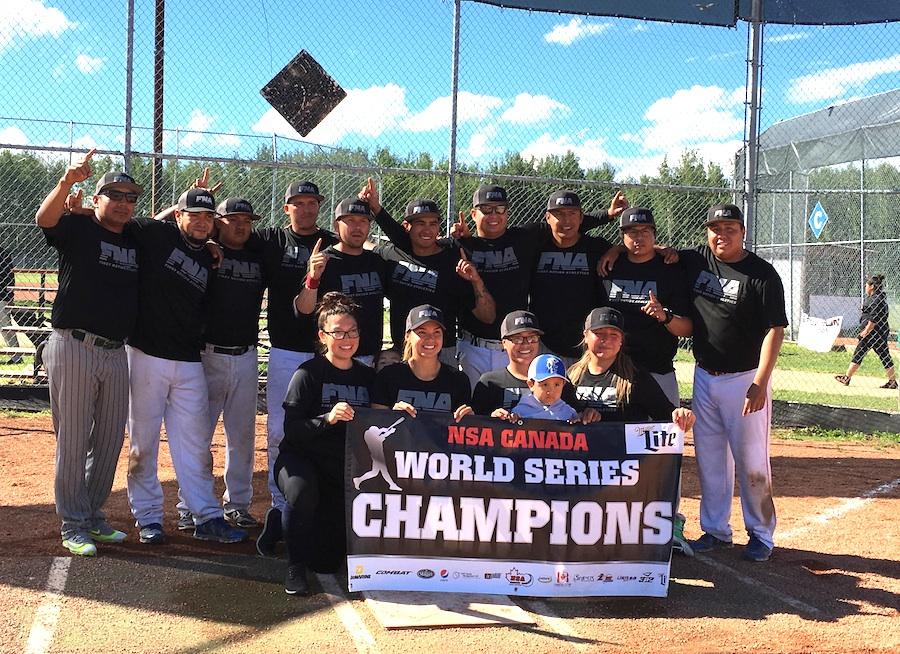 “It’s such a big prize amount,” she said. “Usually with slo-pitch tournaments you don’t see that kind of money for the top prize. The winning team usually gets somewhere between $800 and $1,200.”

The top nine finishers at this year’s Native World Series ended up taking home some cash. In total, there was about $23,000 in cash and prizes presented.