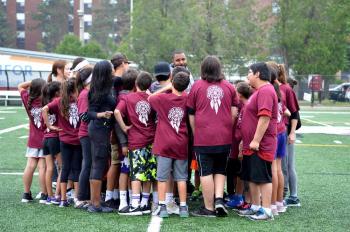 Though he’s not Indigenous himself, John Williams is working closely with McMaster officials to improve opportunities for Indigenous youth. Williams, who was a member of the Canadian Football League’s championship Toronto Argonauts squad in 2004, teamed up McMaster’s Indigenous student service office this past summer.

Williams, a former running back who is now 40, played eight seasons in the CFL. Besides Toronto, during his pro career he also suited up for the BC Lions, Edmonton Eskimos and Hamilton Tiger-Cats.

In recent years Williams had also worked as the Tiger-Cats’ co-ordinator of community relations. During this time he helped set up a football camp in Six Nations, which featured Native American Jim Warne, who played briefly in the National Football League with the Detroit Lions.

Williams, who is Black, was especially impressed with how Warne captivated his youth audience, teaching them about the concepts of the medicine wheel.

“It got me thinking about my own experiences,” Williams said. Williams' father John also played in the CFL. The younger Williams was born in Burlington, Ont. and his family moved to nearby Waterdown, which is still his hometown, when he was 10.

After his own high school career, Williams started off his collegiate career playing at the University of Rhode Island. He then transferred to Pennsylvania’s Edinboro University, located about 35 kilometres south of Erie.

Throughout his collegiate career, Williams felt like an outsider since he was a Black, international student/athlete at schools with predominantly White students.

“It was very similar to my experiences,” he said. “I knew some of the hurdles I had to get through and without much support.”

Williams was also keen to work with Indigenous youth and McMaster University to provide them with various opportunities. He then got in touch with one of his contacts, James Knibb-Lamouche, who is the associate director for Indigenous student services at McMaster.

For starters, a field day was held at the university this past June, involving about 50 Indigenous youth. The day included various athletic competitions as well as the opportunity to interact with some of McMaster’s student-athletes.

Williams was inspired to take part in such a day by the Nike N7 Youth Movement, which began in 2000 south of the border in order to assist Indigenous people’s participation in sports.

“I thought it was a wonderful concept,” Williams said. “Nobody had done it in Canada before.”

Another Indigenous initiative held at McMaster during the summer was a panel discussion on Indigenous women in sport and contemporary issues. This event included a screening of the documentary “Keepers of the Game”, featuring the trials and tribulations of an all-Native high school girls’ lacrosse team from Akwesasne, N.Y.

Also screened at the event were a pair of other Indigenous films, “Spirit Game: Pride of a Nation”, which is about the Iroquois Nationals lacrosse team and the basketball movie “Off The Rez”.

Another Williams/McMaster joint effort that has been launched is the creation of an Indigenous Youth Panel. There are currently six members on the council. Organizers are hoping to add some others to have about a dozen council members.

“We’ve had some excellent feedback on our initiatives,” said Knibb-Lamouche. “That’s part of the reason we’ve decided to start up the initiative for the ASIF program.”

ASIF stands for Access to Sport for Indigenous Females, a venture which is expected to be launched next February or March. The program will see McMaster students travel to Six Nations to assist teens with leadership development and try to inspire them to go on to become university student/athletes.

“I have great hopes for it,” said Knibb-Lamouche. “My office is looking to move it forward as much as possible.”

Knibb-Lamouche, who has Cree and Métis ancestry, is also thrilled that Williams is implementing various Indigenous initiatives connected to McMaster.

“John is fantastic,” said Knibb-Lamouche, who is from High Prairie, Alta., and who has been in his current post at McMaster for the past one and half years. “He’s such a dynamic speaker. And he really gets the kids engaged.”

And Knibb-Lamouche said he’s not surprised Williams is supporting various ventures even though he is not Indigenous himself.

“His focus is on under-represented minorities in sport,” he said. “He wants to get more young African-American or Indigenous kids into athletics.”

Williams and his father also have a spot in CFL annals. They are the only African-American father-son tandem to both win Grey Cup championships.
The elder Williams won a CFL title with Hamilton back in 1972.

A field day was held at the university this past June, involving about 50 Indigenous youth.