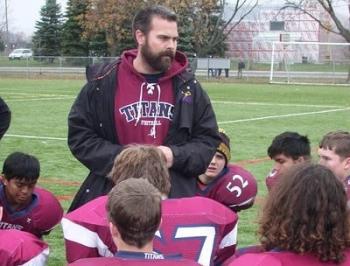 Justin Shakell is one of two inaugural winners of the new Indigenous Champion Award bestowed by the Canadian Football League Alumni Association. The other is Jim Styres.

“You want to be a positive role model. You want to steer kids in the right direction. I hope I’m doing that with my teaching and my coaching.” — Justin Shakell
By Sam Laskaris
Local Journalism Initiative Reporter
Windspeaker.com

Though he was drafted by the Hamilton Tiger-Cats, Justin Shakell never played a game in the Canadian Football League (CFL) or any other professional circuit.

Yet Shakell, a 41-year-old member of the Mohawks of the Bay of Quinte, is one of the inaugural recipients of a new award that will be presented annually by the Canadian Football League Alumni Association (CFLAA).

The association has created the CFLAA Indigenous Champion Award. This new accolade is an extension of the CFL’s Diversity is Strength strategy and its truth and reconciliation initiatives.

Shakell is currently the head coach of the Quinte Skyhawks, a senior varsity squad that competes in the Ontario Football Conference.

“You want to be a positive role model,” Shakell said. “You want to steer kids in the right direction. I hope I’m doing that with my teaching and my coaching.”

Shakell, a former all-Canadian at Wilfrid Laurier University in Waterloo, Ont., is one of the two inaugural winners of the Indigenous Champion Award.

The other recipient is Jim Styres, a member of Six Nations, who achieved success as both a player and coach. Styres died in 2018 and will be recognized posthumously at the Grey Cup Legends Luncheon, which will be staged in Hamilton on Dec. 10.

The luncheon is part of this year’s Grey Cup festivities. The CFL’s championship final will be held two days later on Dec. 12 in Hamilton.

The CFLAA has been presenting its Alumnus of the Year Award for some time now. Shakell is pleased to see the association has added its new Indigenous award.

“I think it’s a good thing they are stepping up into a leadership role and giving attention to it,” he said.

The idea for creating the Indigenous award surfaced after John Macdonald, a former Tiger-Cats player from Six Nations, was added to a CFLAA committee.

Macdonald is the one who suggested the award be created.

Macdonald is also the head coach of the football program at the Brantford school.

CFLAA officials will be primarily looking to honour Indigenous individuals with their new award.

Those who will be considered for the award are any former CFL player with Indigenous ancestry who either made or is making a key contribution to football or his community.

An Indigenous coach who is supporting minor football will also be considered.

Non-Indigenous coaches can also be nominated for the award provided they made or are still making positive impacts on Indigenous football players toiling at any level.

“It covers a lot of broad areas,” Macdonald said of the award.

Eight individuals were nominated for this year’s award. They were all from southern Ontario as CFLAA officials are keen to have nominees each year from the region where the Grey Cup will be staged that year.

Jason Riley, the chair of the CFLAA’s board of directors, said details of the Indigenous award came together quickly.

“The whole thing happened in a couple of months,” he said. “We didn’t even know four months ago if we’d have a Grey Cup this year because of COVID.”

The pandemic had forced the cancellation of the entire 2020 CFL campaign.

Riley said the CFLAA was looking at ways to support the CFL reconciliation strategy. And even after Macdonald suggested the creation of the Indigenous award, Riley said it was uncertain how quickly things could happen.

“We initially thought we wouldn’t be able to present this until next year,” Riley said, adding Macdonald deserves kudos for expediting the process. “He’s been instrumental in getting this off the ground now.”

Riley added news of the Indigenous Champion Award has been extremely well received.

“We’ve had an incredible positive response to this award,” he said.

Shakell began his own gridiron career back in 1992 when he joined the Belleville Minor Football League. He went on to play five seasons at Moira Secondary School in Belleville, which has been renamed to Eastside Secondary School.

Shakell then spent five years at Wilfrid Laurier University. Over the years he played defensive end, defensive tackle and was also utilized as a backup long-snapper and punter.

Shakell, a Tiger-Cats’ draftee in 2003, began his coaching career in the Belleville minor football system, while he was still in university.

He coached at a pair of high schools before returning to community football and taking over the Skyhawks’ head coaching duties.

As for Styres, he began his playing career with the Brantford Bison football league. He went on to play for the Hamilton Panthers, who captured the Dominion intermediate championship in 1951.