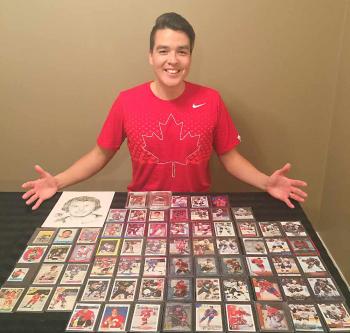 Naim Cardinal with his specialized collection of Indigenous NHL rookies

Naim Cardinal’s quest is complete. For now. Well, sort of.

The 36-year-old Edmonton resident, who has been collecting hockey cards on and off since he was a kid, began a specialized journey of collecting back in 2014.

Cardinal, a member of Alberta’s Tallcree First Nation, decided to start collecting rookie cards of every single Indigenous athlete who has played in the National Hockey League.

Cardinal tweeted out a picture of himself and his complete collection of 70 cards earlier this week. The picture even got a reaction from one of the players in his collection.

“Theo Fleury saw it and retweeted it,” Cardinal said of the Métis player, who toiled in 1,161 matches during his NHL career and was a member of the 1989 Stanley Cup champion Calgary Flames.

Cardinal estimates he probably has about 10,000 hockey cards in his collection. He also has about 2,000 baseball cards that he has saved and an additional 400 football cards.

But he was looking to do something different when he came up with the idea to seek out rookie cards of every Indigenous player to skate in the NHL.

“I just came up with it one day,” he said. “I was looking for something that would stop me from being bored in my collection.”

In his pursuit to complete his collection, Cardinal had various strategies.

Once he decided to start collecting rookie cards of Indigenous players, Cardinal was not immediately sure how many cards he was seeking.

“I didn’t have a clue,” he said. “I didn’t know how many players there were. I just started doing research using different websites that were online listing players.”

Cardinal ended up discovering not every single Indigenous player to lace up his skates in the NHL had a rookie card.

For example, Vic Mercredi, who has Chipewyan ancestry, only ended up appearing in two games with the Atlanta Flames during the 1974-75 campaign. Cardinal believes no NHL card was ever issued for Mercredi, who was born in Yellowknife.

A number of other Indigenous players also were never issued NHL cards. Upper Deck is the official NHL card producer of league-wide sets. So Cardinal had to settle for acquiring some card from team-issued sets.

One card that proved to be rather challenging to acquire was the one featuring Ted Hodgson. Hodgson, who was born in Hobbema, Alta., played just four games with the Boston Bruins during the 1966-67 season. Cardinal could not find an NHL card for Hodgson. But he did eventually track down a Hodgson card from his pro days, when he was a member of the Cleveland Crusaders in the World Hockey Association.

Cardinal said he has no idea what his collection of Indigenous player cards is worth. And it doesn’t really matter to him since he is not about to sell it.

“To be honest I don’t know what it’s worth,” he said. “But it’s going to stay in my family for a while.” Cardinal said he’ll probably end up passing on his collection to his children one day if they are interested in it.

Cardinal has a daughter who is one-and-a-half. His second child, a son, is scheduled to be born this coming February. Cardinal is also not quite sure how to display his collection.

Cardinal is contemplating the idea though of starting up a website to display his cards. He is thinking of adding some biographical information on each player in his collection.

“It just depends when I can do that,” he said. “Hopefully soon but I am busy with my work, my family and my collection.”

Cardinal is working as the Indigenous community engagement advisor at Edmonton’s NorQuest College. He’s also taking night classes at the University of Alberta as he works towards his Master’s degree in Secondary Education.

Though there are 70 Indigenous players in Cardinal’s rookie card collection, he actually has 110 cards of those players. Some of them are in varying conditions while others are rookie cards from different card companies.

“I’m still adding to it,” he said. “Some of them are older cards and not in the best condition. If I find a better one, I’ll bring that into my collection.”

Cardinal also anticipates making additions to his collection in the near future as there are a number of Indigenous players in the minor pro or junior ranks who are expected to make the jump to the NHL soon.

This list includes Ethan Bear, an Edmonton Oilers’ prospect, who is currently a rookie in the American Hockey League with the California-based Bakersfield Condors.