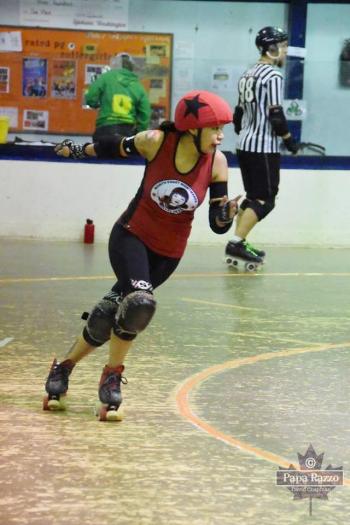 Sasheen Wesley has been forced to slightly alter her long-held nickname.

The 33-year-old, a member of British Columbia’s Kitselas First Nation (one of the five Tsimshian Nations), was given the moniker Bashful many years ago because of her shyness. But when Wesley took up roller derby a few years ago, a sport in which competitors often have catchy nicknames, she became known as Bash-Full.

Though she hyphenated the name and added an extra letter, Wesley thought it was an appropriate one, not only because she was timid but also because participants often bash each other in roller derby.

“I wanted it to sound a bit different and look different,” Wesley said of her current nickname.

Though she only took up roller derby in 2013, Wesley is now gearing up to make a bit of history.

She will be part of the Team Indigenous squad that will participate at the Roller Derby World Cup this coming February in Manchester, England.

The 2018 event will mark the third time the Roller Derby World Cup has been staged but it will be the first time that Team Indigenous has entered the tournament.

Besides Team Indigenous, 39 other countries are expected to send representatives to Manchester.

Team Indigenous will be placed into the 10-team Emerging Nations category. All of the entrants in this division will be making their World Cup debut.

The inaugural Roller Derby World Cup tournament was held in 2011 in Toronto. Team USA defeated Canada in the championship final.

And the second World Cup was staged in Dallas in 2014. The Americans defended their crown, beating England in the final.

Besides Wesley, the Team Indigenous roster will include seven other Canadians. The team will also consist of 10 athletes from the United States and two from New Zealand.

Wesley said the concept of forming a Team Indigenous came from American Melissa Waggoner, also known as Mick Swagger. She had previously represented the U.S. at the World Cup.

“It was a dream of hers as she has a very strong love of her culture and of roller derby,” Wesley said.

Since they live in various parts of the world and trying to get athletes together for tryouts would be challenging, those who were interested in being on Team Indigenous were asked to submit video highlights of themselves in action.

The deadline to submit an application was in July. Wesley found out last month that she was named to the team.

About 45 individuals had applied to be on the squad.

Wesley was a bit surprised she cracked the roster.

“Honestly, not really,” she said when asked if she thought she would make the team. “I’ve never competed at a high level before. I’ve only competed for my home team.”

That would be the Northcoast Nightmares, who are based in Terrace, B.C.

Wesley first heard of the club when she saw team members in a parade. At the time, Wesley was a stay-at-home mom with seven children. She now has eight kids.

“I was curious about it so I gave it a shot,” she said of how she got into the sport in 2013. “Everybody was very welcoming. It really brought me out of my shyness.”

“It was something that I could do for me,” she said.

Wesley’s eight children range in age now from 16 years to 11 months. Four of her children have followed her footsteps and have taken up roller derby.

Wesley said she is able to juggle raising eight children and having an athletic career because of her supportive partner John Erickson, who is home on time to watch their kids during her evening sessions.

Some of Wesley’s teammates from Canada on Team Indigenous also have flashy nicknames. They include Amil Dupuis-Rossi (The Fighting Mongoose), who is from Maple Ridge, B.C., Melissa Robinson (Faye Tality) from Prince George, B.C. and Michelle Cross (Squarrior) from Kahnawake, Que.

Wesley said Canadian players on the team are attempting to organize some practice sessions in B.C. before the club leaves for England.

The squad is also expected to have some training sessions in Manchester before the World Cup commences.

Team members are currently looking for sponsorships and tossing around some fundraising ideas of their own.

Unless sponsors come through, athletes are expected to cover their own costs for the tournament.