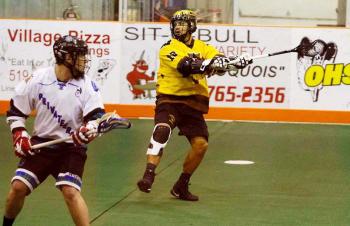 Peter Jacobs, on right, and his Kahnawake Mohawks' teammates will be shooting for a national title in 2019. Photo by Greg Horn

Despite not winning a single game in 2018, the Kahnawake Mohawks will have an opportunity to capture a national championship next summer. That’s because the Montreal-area Senior B men’s lacrosse team has been awarded the hosting rights for the 2019 Presidents Cup.

Canadian Lacrosse Association (CLA) officials announced on Tuesday that the Mohawks, members of the Quebec Senior Lacrosse League (QSLL), will host next year’s national tournament, which is scheduled to run from Aug. 26 through Sept. 1.

Even though his squad failed to register a single victory this year, Mohawks’ general manager Greg Horn said he was not surprised to see his franchise awarded the national tournament.

“It’s not about the level of play the team had the season before,” Horn said. “It’s about the ability to organize a tournament like this.”

The Kahnawake franchise has hosted the Presidents Cup twice before, in 2000 and in 2013. When the Mohawks last served as hosts some games at the tournament attracted about 3,000 fans.

At the time, capacity at the Mohawks’ home rink was about 3,600.

Horn said he believes capacity is slightly less now at the Mohawks’ arena since renovations have been done, including adding some permanent seating.

Prior to its winless 2018 campaign, the Kahnawake franchise had been a powerhouse in the QSLL, winning league championships nine out of the previous 10 years.

But the Mohawks had more than their share of struggles this past season. The club lost all 14 of its regular season contests and both of its playoff matches.

“For us it was a different year than what we are used to,” Horn said.

The Mohawks’ brass, however, had plenty of indications the 2018 season could be a trying one.

“Some of our players took the year off,” Horn said. “And some players didn’t play due to injury.”

As a result, the Mohawks did allow several Montreal-area players who had not previously toiled at the Senior B level to suit up for the team.

Despite the club’s lack of success, Horn said all those who toiled for the Mohawks this past season will be invited to try out for the club in 2019. But that does not necessarily mean they will all once again crack the Kahnawake roster.

Horn anticipates there will be quite a few new bodies looking to play for the Mohawks next year.

“Whenever you host a national championship, things get exciting,” Horn said. “People want to be part of that and be part of the action.”

As hosts, the Mohawks will be guaranteed a spot in the national tournament. And Horn believes having the opportunity to challenge for a Canadian championship will be appealing to quite a few players who will be seeking a spot in the Kahnawake lineup.

Though there have been some rumblings of which elite lacrosse players would be willing to suit up for the Mohawks in 2019, nothing can be officially said at this point.

“The transfer process only begins in March,” Horn said of a CLA rule. “It is the only time we can begin to talk to other players.”

Peter Jacobs, who has spent the past five years playing with the Kahnawake squad, also believes that by hosting the nationals the Mohawks will be able to attract some top-notch talent.

“There are some guys that have played for the team before and are willing to come back,” Jacobs said. “And there are a couple of new guys as well.”

Jacobs has already been a member of two Presidents Cup winning teams. He was a member of the St. Regis Braves that captured back-to-back national championships in 2011 and ’12.

Despite their numerous league titles, the Mohawks have never won the Canadian crown. They have come close, however, twice in recent years, winning silver medals at the nationals in both 2013 and 2016.

The Mohawks will be hoping to win it all at home next year.

“Our goal is to finally get our name on the Presidents Cup,” Horn said.

Jacobs is also confident the Kahnawake team will be much better next year and ready to not only vie but win a national crown.

In recent years the Presidents Cup tournament has been featuring between 8 and 10 entrants.