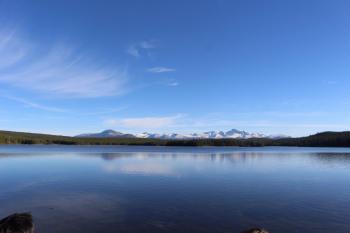 This is in direct violation of Tŝilhqot’in law

The Tŝilhqot’in Nation is assembling for a peaceful action to exercise their Aboriginal rights and ancestral laws in protecting Teẑtan Biny (Fish Lake) and Yanah Biny (Little Fish Lake), a place of profound cultural and spiritual significance for the Tŝilhqot’in people, from an extensive drilling program by Taseko Mines Ltd. (TML) in support of the rejected New Prosperity mine proposal.

On June 27, 2019, TML wrote to the Tŝilhqot’in Nation advising that it would mobilize heavy equipment, including logging and road-clearing equipment, starting July 2, 2019. TML also wrote to say that the ground disturbance work would begin on July 3, 2019.

TML’s drilling program was approved by BC despite the 2014 rejection of the mine by the Government of Canada. In a total rejection of the UN Declaration on the Rights of Indigenous Peoples, BC approved drilling for a mine that cannot legally be built.

“Yet the company wants to come in and tear up a place that is as sacred to us as a church. We are deeply concerned about this escalating conflict. As a Nation, our top priority is the safety and security of our own members, and TML employees and contractors. That’s why our Nation must take peaceful action to prevent this situation from getting out of control.”

“When the Tŝilhqot’in must defend itself from invaders, it brings us back more than 150 years and makes us feel that nothing has changed with regards to Crown and Indigenous relations,” said Nits’ilʔin (Chief) Russell Myers Ross, Vice-Chair, Tŝilhqot’in National Government.

“The words of exoneration made towards our war leaders by the Crown was meant to recognize wrongs and prevent future conflict. BC needs to understand that TML does not have and will not secure the consent of the Tŝilhqot’in Nation, and (BC) must intervene to prevent the conflict from getting worse."

“Nowhere else has a Nation been subjected to not one but two federal environmental reviews, both confirming the cultural and spiritual importance of this place to our people, and which led to two federal rejections of the mine,” said Nits’ilʔin (Chief) Jimmy Lulua, Xeni Gwet’in First Nations Government.

“We are looking for the same kind of leadership in Premier John Horgan now. The Province of BC has the tools they need to intervene, but until now appeared unwilling to show leadership and resolve this conflict once and for all. Now is the time to finally act.”