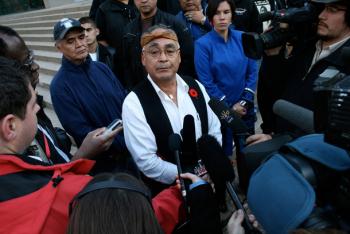 “It should not take the Government of Canada 10 years to live up to a judgement of Canada’s high court. Why do they think they are above the law?” —Kekinusuqs, Judith Sayers, president of NTC

After 10 years of government obstruction, five Nuu-chah-nulth Nations, supported by the Nuu-chah-nulth Tribal Council (NTC), urge the implementation and fulfillment of constitutional fishing rights that were recognized by the B.C. Supreme Court in 2009.

“It should not take the Government of Canada 10 years to live up to a judgement of Canada’s high court. Why do they think they are above the law?” questioned Kekinusuqs, Judith Sayers, president of NTC.

“This is absolutely unacceptable. If this were anyone else, the government would have settled with them long ago. This means 10 years of lost revenue to our fisherman and a denial of our right to a commercial fishery. The federal government must not stall anymore and must move immediately to remedy this issue.”

Despite this pivotal Supreme Court ruling in 2009, implementation of the ruling has not only been significantly delayed but challenged by a series of unsuccessful attempts to appeal the decision by the Canadian government.

"The decision by successive Conservative and Liberal governments to fight First Nations in court over rights already affirmed by the Supreme Court to catch and sell fish within their territories is a betrayal of the Nation-to-Nation relationship that must be the foundation of reconciliation. It is an unconscionable assault on the livelihood of First Nations fishers and on our regional economy," said Gord Johns, Member of Parliament for Courtenay-Alberni.

“We should not have to fight for a way of life that our ancestors carried on for thousands of years. Past governments imposed small portions of our territory as reservations because we depended on the sea. Through government policies our people have been systematically forced off the waters,” said Wickaninnish, Clifford Atleo, lead negotiator for the Ahousaht First Nation.

This 10-year commemoration of the Supreme Court decision has compelled the five Nations (Ahousaht, Hesquiaht, Tla-o-qui-aht, Ehattesaht, and Mowachaht/Muchalaht) ?to insist on action from the newly elected government. A letter was sent to Prime Minister Justin Trudeau earlier today, citing promises made during both elections. The letter requested the following from the Prime Minister:

1. Direct your Ministers and their staffs (CIRNA and Fisheries) to conclude a reconciliation agreement with our five Nations by March of 2020 so that we can begin to implement our expanded community fisheries in the 2020 fishing season.

2. Direct your Ministers of CIRNA and Fisheries to meet with representatives of our five Nations as soon as possible so we can brief them directly and from our perspective on the steps remaining to conclude an agreement with Canada.

3. Recognize that agreement or no agreement our Nations require and are entitled to meaningful, economically viable fishing opportunities.

4. Direct your Minister of Fisheries and DFO staff to revise specific policies and regulations to foster rather than impede our community-based fisheries.

These are the concrete steps outlined in the five Nations letter to the Prime Minister. Despite the cumulative economic setbacks caused by the delays, the five Nations stated that they were still willing to negotiate in order to move the process forward.

“We are ready to meet with your Ministers and remain willing to work with Canada to finalize an agreement that will help give life to our right, benefit our communities and the sea resources on which we all depend,” the Nations wrote in the letter sent to Prime Minister Trudeau.

“It is our intention to re-establish an independent way of life through sound management and harvesting methods. The government encourages successful economies and we intend to be a part of that.” said Atleo.

The NTC will continue to support the five Nations, urging the government to implement the 2009 Supreme Court ruling.