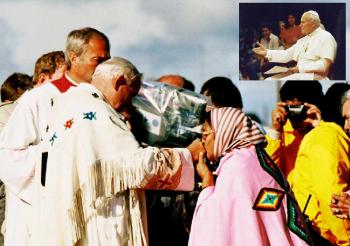 "Your encounter with the gospel has not only enriched you, it has enriched the church. We are well aware that this has not been without difficulties and, occasionally, blunders." —Pope John Paul II

When Pope John Paul II passed away on April 2, 2005, people from around the world, Catholics and non-Catholics alike, joined in mourning and in prayer.

He had travelled far and wide during his 26-year papacy, touching many. John Paul II visited more than 120 countries, and was the first pope ever to visit Canada, even though the presence of the Catholic Church in this country predates Confederation.

The relationship between the Catholic Church and Canada's Aboriginal peoples began in the early 1600s with the arrival of Catholic missionaries, who came to bring their religion to the country's original peoples. 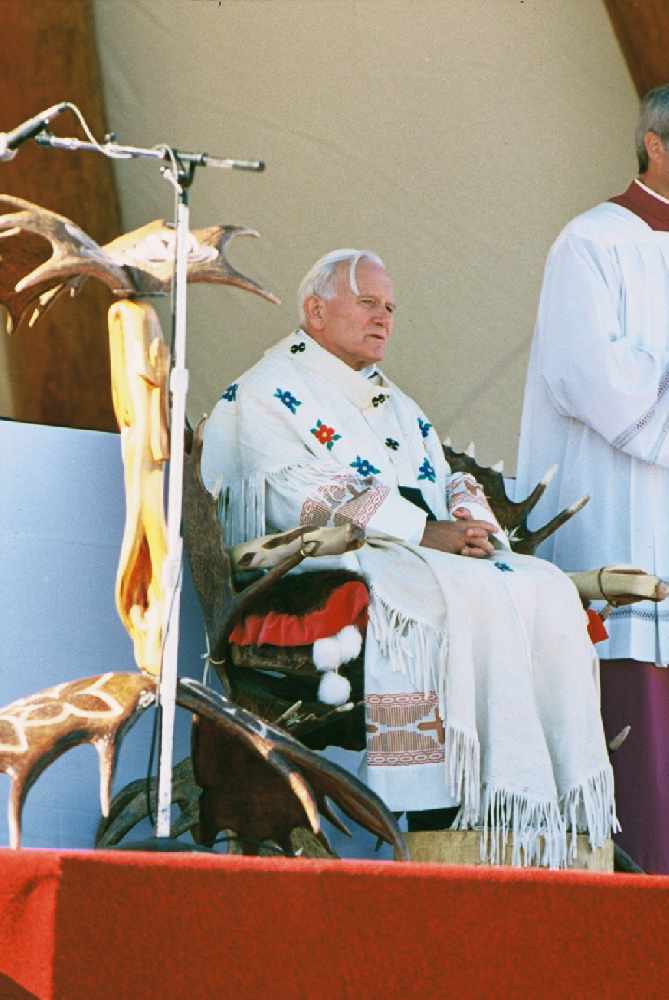 Four hundred or so years later, that relationship still exists, with many Aboriginal people across the country embracing the Catholic faith, but that isn't to say the relationship has always been an easy one.

Since the relationship first began, Aboriginal people have suffered as a result of attempts to force the church's beliefs and ways upon them. Today, the most obvious and painful symbol of those attempts is the residential school system, through which many Aboriginal people were robbed of their language and culture and made to suffer physical, sexual and emotional abuse.

The Catholic Church has never issued a formal apology for the role it played within Canada's residential school system, (and will not under the current Pope Francis we learned from reports March 28, 2018). However, John Paul Il acknowledged the church’s role on several occasions.

During his first official pilgrimage to Canada as pope, a 12-day cross-country trip in 1984, he visited the shrine of Sainte-Anne-de Beaupre in Quebec, where he spoke of the church's past errors and of it's modern-day respect for Aboriginal culture.

"Your encounter with the gospel has not only enriched you, it has enriched the church. We are well aware that this has not been without difficulties and, occasionally, blunders."

The Pontiff also visited the Martyr's Shrine in Midland, Ont. in what was once Huronia, and the place where Jesuit missionaries first began their work of conversion. There he praised Indian culture and values during the visit and spoke of the need for reconciliation.

In a merging of Catholic and Native spirituality, he took part in a sweetgrass ceremony and was presented with an eagle feather by an Elder.

On the last day of that first Canadian visit, John Paul II was scheduled to visit Fort Simpson in the Northwest Territories, but dense fog prevented him from landing in the community on two separate occasions.

After the second attempt his plane instead landed in Yellowknife, where he delivered, through a video link-up, the speech he'd prepared for the people of Fort Simpson. In the speech he spoke not only of historic wrongs experienced by Aboriginal people and the need for reconciliation, but also in support of the right of Inuit and Dene people to self-determination.

"Today, I want to proclaim that freedom which is required for a just and equitable measure of self-determination in your own lives as Native peoples. In union with the whole church, I proclaim all your rights—and their corresponding duties.

“And I also condemn physical, cultural and religious oppression, and all that would in any way deprive you or any group of what rightly belongs to you ... For you, a land-base with adequate resources is also necessary for developing a viable economy for present and future generations. You need likewise to be in a position to develop your lands and your economic potential, and to educate your children and plan your future.”

After being forced to cancel his visit to Fort Simpson in 1984 he promised to travel to the community during a future trip and made good on that promise in 1987. During the visit, he learned to speak a little bit of South Slavey, yet another way he demonstrated to followers that much had changed about the way the church viewed Aboriginal cultures since the days of the residential schools.

John Paul II seemed to take a special interest in Indigenous members of his flock, perhaps because he had an understanding of the oppression under which Aboriginal people have suffered. Oppression was something he had first-hand experience with, and something he fought against throughout his life.

He was named Karol Jozef Wojtylas when born on May 18, 1920 in Wandowice, Poland, a country with a long history of being subdivided and ruled by neighboring countries which tried in vain to destroy the language and culture of the Polish people, and even to annihilate them entirely.

Karol was born during a rare time in Polish history when the country was enjoying independence. He grew to be a young man who enjoyed outdoor activities, acting and was also a very good student with a gift for learning languages. He spoke 11 fluently.

After completing high school, Karol attended Jagiellonian University in Cracow, but his studies were cut short when Germany invaded Poland, leading to war in Europe. He completed his first year of study, but when he returned to the school for his second year, he discovered that all of the university's professors had been arrested by the Germans and sent to concentration camps.

In the fall of 1942, Karol decided to become a priest, a dangerous decision in a time when Poland was under Nazi occupation and when most priests in the country ended up in concentration camps. His training had to be done in secret.

He completed his studies and became a priest in 1946, a year after the end of the war. In 1958, at the age of 38, he became a bishop, and then in 1967 a cardinal, the youngest man to be named to these two positions in modern-day Poland.

Then, in 1978, at the age of 58, he was elected as the first Polish pope in the history of the papacy. During more than a quarter century as pope, John Paul II left his mark on every corner of the world stage. He is credited with planting the seed for the overthrow of communism in his home country by preaching about human dignity, the revolution of the spirit and the right to religious freedom during his first tour of Poland in 1979.

His words, it is said, inspired Poland's Solidarity movement, whose work in turn inspired other groups to rise up against communist governments across eastern Europe. He publicly denounced the policy of apartheid in South Africa, and became the first pope to visit a Jewish synagogue and an Islamic mosque. He established diplomatic relations between the Vatican and Israel, and worked to establish relations with the Palestine Liberation Organization. In Cuba, he spoke out against communism, but also had strong words about the evils of a capitalistic state, as exemplified by the United States, where more value is placed on money than on humanity.

Pope John Paul II died in his apartment at the Vatican on April 2, 2005 at the age of 84. After his death, when Aboriginal people across Canada gathered to celebrate his life, they did so in many ways. Some lit candles, some read from the bible, some burned sweetgrass and honored his memory with drum songs. The fact that all of these ways of celebrating are part of what the Catholic church has become is part of John Paul's lasting legacy.