Jose Amaujaq Kusugak: Patience, perseverance and humour was his hallmark 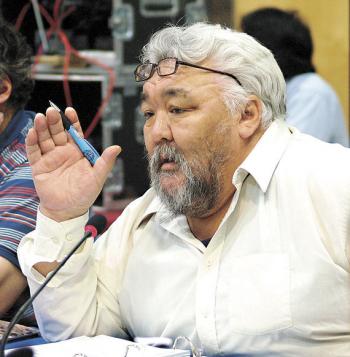 By Dianne Meili, with files from Whit Fraser
Windspeaker.com Archives, 2011

Pouring Sweet and Low into his cup of tea, Jose Amaujaq Kusugak stopped to laugh at himself.

“What the hell am I doing with this stuff? How can real sugar hurt me now?”

Despite the fact he’d lost weight and his hair had turned snow white, aggressive cancer failed to eradicate the leader’s sense of humor. He died on the morning of Jan. 19 at his home in Rankin Inlet, after refusing further hospital treatment in Winnipeg.

“He died as he had lived, candidly, publicly, and, above all, with courage and control,” said Whit Fraser, a long-time friend who worked with Jose at the Inuit Tapiriit Kanatami. Jose was president from 2000 to 2006.

Fraser and current Inuit Tapiriit Kanatami leader Mary Simon visited Jose shortly before he passed away to say goodbye, thank him for his life’s work, tell him they loved him, and subsequently observe his indomitable spirit.

Last spring, Jose told his friend, CBC interviewer William Tagoona, about his cancer diagnosis. On the radio he urged his fellow Inuit to take advantage of medical facilities available to them and to go to the nursing station when they are feeling ill.

“I wasn’t surprised at his approach. Jose has always been open about everything,” Tagoona said in an article in the Nunatsiaq News.  The two continued to talk publicly as the cancer progressed.

As with his personal challenges, Jose was never afraid to defend the rights of Inuit people, nor was he timid about making federal politicians aware that his people are different from First Nations.

An oft-told story about Jose germinated during one of his many meetings with former Prime Minister Paul Martin, whose government was pursuing a “one-size fits all” policy in 2000, meaning Inuit issues were being addressed under a broad First Nations umbrella.

Jose asked the leader why Canada claimed to be a great multi-cultural society while insisting on a melting pot for Aboriginal Canadians.

“Inuit are not Indians,” he claimed.

Martin was flabbergasted, but not defensive. He promised change and within weeks “Inuit specific” became a familiar and acceptable term in the public service.

“He gave the Inuit a new identity in Canada … one that was very badly needed,” said Fraser.

Jose was the president of the Kivalliq Inuit Association, a regional Inuit group based in Rankin Inlet. In his career he held many titles, including president of Nunavut Tunngavik Inc., the organization that pushed the historic Inuit land claim that created Nunavut.

“In a way, Nunavut was the story of his life,” said Fraser. “He wasn’t alone in this endeavour, and he’d be embarrassed by some of the media coverage that suggested he was.”

The actual land claim was initiated by Tagak Curley, who became a Nunavut government minister. Tagak hired Jose as the land claims co-ordinator and communicator to explain it to people in the regions and communities. Jose bought in right from the start. To ensure the process and issues were well understood, he went to work at CBC Radio for a decade to spread the message.

The Nunavut land claim struggle was uncharted waters and Jose knew he could only hurdle a major obstacle regarding the lack of understanding of the political issues of the day among Inuit.

“He had done remarkable work regarding Inuit culture and language and we needed his ideas and his energy,” Ward said.

Jose received the CBC president’s award in 1998 for remarkable achievement in raising the standard of Inuktitut broadcasting.

“He told me this was his greatest achievement,” said Fraser.

Before becoming politically involved, Jose devoted himself to the preservation of his Inuktitut language. While working as a cultural and language advisor at the Churchill Vocational Institute, he hit upon the goal of creating a common Inuktitut writing system.

Jose recognized that both Roman orthography from the Catholics, and syllabics from the Anglicans, were imposed writing systems. Also, many structures and sounds were being used by Inuit in different regions.

“Jose was successful in creating a new dual-orthography writing system, where a new syllabary ran parallel to a new Roman system, but in the end a standardized Inuktitut language and writing system remained an unfulfilled dream,” explained Fraser.

Born in 1950 at Repulse Bay, the second child in a family of 12, early on in life Jose came to see education as the key to Inuit cultural survival. Unlike many of his peers, he found the experience of residential school to be rewarding and productive.

“He was a smart guy and he understood what teamwork was,” said Fraser, acknowledging his friend’s personality and ability as a communicator and educator were additional attributes he used to accomplish life goals.

These skills were put to use when he crafted a famous phrase to define Inuit within Canada and impress his people’s position in the Canadian consciousness “First Canadians – Canadians First.”

Using these four words at a meeting with the premiers of Canada’s provinces and territories, he received immediate and resounding approval, especially from Newfoundland’s Danny Williams.

“Mr. Kusugak, those words – Canadians First – really moved me,” he said. It was an outstanding endorsement, considering Premier Williams was once so entrenched in a dispute with the federal government that he removed the Canadian flag from provincial buildings.

Jose raised the national Inuit profile even higher by changing the name of the national organization to Inuit Tapiriit Kanatami, meaning ‘Inuit are united in Canada’ and adopting a new logo showing the four Inuit regions represented by joined hands embracing the maple leaf.

A devoted family man, Jose said he loved his wife of 35 years, Nellie, from the moment he first laid eyes on her. Together, they had four children: Pujjuut, Alaana, Aliisa and Special.

Jose was also passionate about music and sports, but it was his sense of humor that sustained him. He always found the funny side of everything and once said ‘We owe it to our soul and spirit to laugh and see the sunny side of life.’

“I know he was sometimes frustrated in his political life, though he never showed it publicly,” said Fraser. “He had great patience, determination and perseverance. He would say, ‘Well, if it doesn’t happen now, that doesn’t mean it won’t happen someday. We’ll just wait for another and a better opportunity.’”