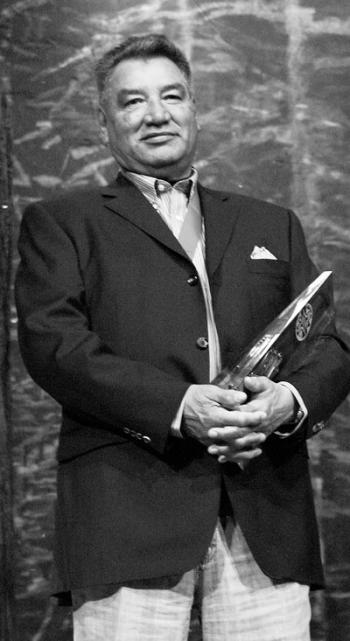 The man responsible for Métis being entrenched in section 35 of the Canadian Constitution passed away Nov. 9, 2012 after working for Aboriginal rights.

“You can say a lot about a leader like Jim Sinclair. Chances are we’ll never see another one like him. He had a commitment to our community and he took it to the national level and international level. But I think what’s really important is that he was able to embrace his family and love them after all the time he, and they, were apart. He sacrificed a lot while he lobbied for Aboriginal rights,” said long-time friend Don Ross.

“His wife and kids could have said ‘Dad, don’t run again. We need you here with us,’ but they never did. They lived here in Saskatchewan while he stayed in Ottawa.”

“That’s the thing about these great leaders. Most people don’t realize what they give up in the sense of family life while they’re fighting political battles to better our lives. He was at peace in the end,” said Ross.

Born a dispossessed Métis in Punnichy, Sask.—an Aboriginal squatter community in the Qu’Appelle Valley— Sinclair’s first battle was with alcohol. He kicked the addiction with the help of sports—specifically golf—and helped establish the Saskatchewan Native Addictions Council.

By 1964 he was a fieldworker for the Métis Society of Saskatchewan, and entered politics in 1967, becoming president of what is now known as the Métis Nation of Saskatchewan in 1971. He held the post for the next 18 years.

“Jim was helping to organize the Dene up there, and the local priest called him the devil,” recalled Ross. “They had a fistfight right there on main street and Jim took him out.

“There’s a picture of Jim wearing his buckskin coat and Billy Jack hat standing face to face with Trudeau back in 1978. They’re a foot apart from each other, staring each other down. Jim never gave in.”

He became known for his eloquent, fiery speeches, which were never scripted but came straight from the heart, Ross attests. A poignant moment came when he spoke at the failed First Ministers Conference on Aboriginal Rights in March 1987; Prime Minister Mulroney was visibly awed by the passionate and articulate case Sinclair made.

During his early, turbulent years of activism, Sinclair led movements to take over the Department of Northern Saskatchewan building, and even Waskesiu Park in 1983 before an athletic event.

“He had to have the Métis voice heard, and so he got the dignitaries’ attention before they had their party,” Ross said.

Even during lunch breaks at the parliamentary restaurant, Sinclair asserted his Aboriginal right.

“You had to wear a tie if you ate there. And if you didn’t have one, they kept some at the entrance to put on. Jim just ignored the men at the door and walked in” while some of his entourage tied them around their heads like a like a bandana.

“He always said ‘that’s your (European) outfit, not ours’.’”

Whether Sinclair met with the Prime Minister, the Queen, or the Pope, “he’d wear a blazer and a scarf, but never a tie,” said Ross.

As head of the Métis in Saskatchewan, Sinclair fought for increased housing, employment, and addiction treatment for the Métis and non-status Aboriginals.

During the 1970s, he also helped establish the Native Council of Canada, now known as the Congress of Aboriginal Peoples, which he led from 1994 to 1996.

It was in 1982 that he successfully lobbied to have the Métis included in the Constitution Act.

In 2006, he was recognized with a lifetime achievement award at the National Aboriginal Achievement Awards; and he was honored at the Federation of Saskatchewan Indian Nation assembly.

Both Sinclair’s father and grandfather lost their status after returning from war. Though he crusaded for Métis rights most of his life, Sinclair was re-enfranchised in the late 1990s after affirming his rights before a judge following a hunting-out-of-season charge.

When his oldest son,who was the chief of Gordon First Nation, passed away, Sinclair was given his headdress in a ceremony. Though he was already being treated as an Elder, called upon for advice by many organizations, after his son’s death he increased his dedication to Aboriginal spirituality.

“He even received his spirit name in a pipe ceremony from Elder A.J. Felix from Sturgeon Lake,” said Ross. “Jim battled cancer for the past five years, and he started to say it was his time to go and that he wanted to be with Kenny. We always told him ‘no, you have more golf games to play, you have one more hunting trip to make’ but the disease took its toll.”