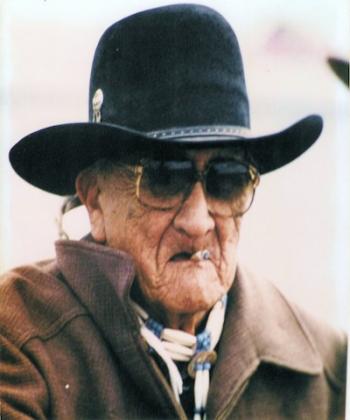 Fools Crow repeatedly said the more humble and unselfish a person is, the more willing Wakan Tanka and his helpers of the four directions are willing to work through them.
By Dianne Meili

Few holy people have been as open about their spiritual practices as Frank Fools Crow, the ceremonial chief of the Teton Sioux who allowed his powers to be written about in books by non-Native authors.

Assuming no ownership of his supernatural abilities—always affirming the “source of power is not ourselves” —Fools Crow explained in detail how he performed “miracles” because he wanted others to believe they could do them as well.

Before he died at the age of 99 on Nov. 27, 1989, Fools Crow spent time in the late 1970s with Thomas E. Mails, a Lutheran minister who wrote about him in several books, including the well-received Fools Crow–Wisdom and Power.

In it, the old man explained how he affected cures, consulted with “talking” stones to learn of future events, “lured” to him what he needed in his life, spirit-travelled, and shape-shifted.

He accomplished all of this by becoming a “clean, hollow bone” through which Wakan Tanka’s (The Great Mystery’s) powers funneled through him.

Fools Crow repeatedly told Mails that the more humble and unselfish a person is, the more willing Wakan Tanka and his helpers of the four directions are willing to work through them.

“Wakan Tanka is concerned with human needs, and not luxuries. If we want luxuries, He has given us at birth the power to work for and obtain these,” he said.

People who have rid themselves of self-serving ego, like medicine and holy people, are the cleanest bones, he explained.

“The cleaner the bone, the more water you can pour through it, and the faster it will run.”

Fools Crow, the nephew of the visionary Black Elk, immortalized in John Neihardt’s Black Elk Speaks, explained he was able to handle the self-sacrifice of being a holy person because he possessed “a clear self image.”

As a Sioux person, he was taught to understand there was no limit to what the higher powers could do through him.

“What we hollow bones really become is the pipeline that connects Wakan Tanka and our community together. Wakan Tanka tells us the direction our curing and healing work must follow and establishes the kind of life we must lead. It also keeps us working at things that do not bring us much income … We have to be strong and committed to stick with this, otherwise we will get very little spiritual power and we will probably give up the curing and healing work.”

Fools Crow described his life as being “filled with power” and he thought about Wakan Tanka constantly. To remain a clean, hollow bone, he refrained from arguing, gossiping and womanizing. He didn’t charge for his healing, although he accepted gifts and gratitude from people he helped. He abstained from mind-altering substances, even the peyote used in the Native American church, because Wakan Tanka could take him higher than any drug ever could.

In his lifetime, he struggled to find someone to pass his medicine to because so few wanted to live morally and frugally.

“While many talk a lot about wanting to do this, they do not really want to give up pleasure and material things. Also, you can tell a true medicine person from an imitator by what they ask you for in return for their help.

“According to where they live, everyone needs enough to live on and pay their bills. But if they ask for more than a fair payment for this, walk away from them. They are only imitators and their power will be very limited.”

As a child born near Wounded Knee in South Dakota around 1890, Fools Crow was forced to quit school in the third grade so he could work and support his family. He travelled around the United States later with the Buffalo Bill Cody Wild West Show before becoming a healer after his initial vision quest in 1903.

He married Fannie Afraid, who passed away in 1954, and his second wife, Kate, died in 1988. Both wives assisted Fools Crow in his curing rites and watched over him while he spirit-travelled inside his sweatlodge.

“Actually, this spirit travel I do has frightened both of my wives,” he once confessed to Mails, explaining he would sometimes remain unconscious inside the lodge for as long as two days.

“Fannie and Kate have had to stay with me and watch over me during this time, and they have told me that sometimes they are afraid I have died.”

Fools Crow used his “mind screen” – the blackness he saw when he closed his eyes and rolled his eyes upward – to receive information from Wakan Tanka. If he saw that a patient’s organs were damaged beyond repair, he revealed to he or she that they could not be cured, but could still be healed.

“Healing is a process that helps the person get rid of anger and blaming” and reconcile unfinished business in their lives, Fools Crow said.

“When we are finished with the healing, the person is calm and ready, even anxious to die. ‘Die’ is not really the best word, because it suggests that it is the end, when it is really the beginning.

“I take them outside to pray with me, and I tell them some of the great secrets I have been shown. At night, I make them a bed under the stars, and I sit beside them for a while. As we continue to talk, I tell them to think about Wakan Tanka being up there and waiting to receive them. If they are Christians, I talk about Jesus’ saying he went to make a place for them.”

Fools Crow asked people who came for curing to spend four days with him. If the weather was good, he fixed a bed for them outdoors under the trees on his property. He loved bringing people to his Pine Ridge reservation home because there was “nothing tall enough to get between us and the higher powers. So we are more conscious of them than people who live in cities are.”

Fools Crow lived long enough to mediate between the U.S. government and AIM activists at Wounded Knee in 1973. At the Elder’s funeral, eulogist and AIM leader Russell Means credited Fools Crow with the peaceful ending of the famous confrontation.

Fools Crow was well-loved for keeping alive Lakota ceremonies that had been outlawed by the government, and is famous for pleading before a congressional subcommittee that the Black Hills be returned to his people.