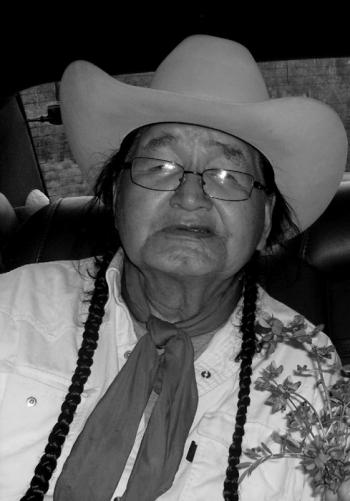 Even the most urbane of prairie people cannot fail to feel a pang of nostalgia looking at them.

The man who once painted mountains and wild animals he’d never seen – thinking the subject matter would earn him sales from white people – was redirected to depict †what he knew by a savvy doctor who saw his potential.

Dr. Allan Gonor could just have easily said “no thank you” to Sapp when the artist made a cold call at his North Battleford Medical Clinic in 1966.

Instead, he bought a painting and gave him money to buy more art supplies, encouraging him to capture the story of his people.

“Allen had grown up drawing pictures of his grandmother, the most important person in his life. He was a sickly child and he didn’t go out and play with other kids. He always said he didn’t have a lot of friends.”

Sapp would often tell his young daughter that he most often drew his grandmother while she was asleep because he always saw her working so hard when she was awake, Delorme explained. As the local medicine woman on the Red Pheasant Reserve, Maggie Soonias was on call to deliver babies and administer herbs to people suffering with illness.

Sapp wanted to share with the world how kind and giving she was, and to depict how close his people were to the land and the essence of traditional values taught to him by his grandparents.

With Dr. Gonor’s offer to buy anything he painted, Sapp went to work in oils, producing as many as two pictures a night, according to an article in the Globe and Mail.

Wynona Mulcaster mentored Sapp, and she hosted his first exhibition in her yard in September 1968.

“Allen Sapp’s paintings tell a story of a people, who despite all obstacles, persevered,” said Leah Garven, curator of the Allen Sapp Gallery in North Battleford.

“They depict life in the 1930s and 40s when people were very poor, especially on the reserve, but also throughout Saskatchewan, and because of this his work has had broad appeal.

People can relate to this honest and simple time. They remember the stories from their own families, and have a deep heart-felt connection to his work.”

Born in 1928, Sapp was raised by his maternal grandparents since his mother was sick with tuberculosis during his childhood on Red Pheasant Reserve. His mother died in 1942.

Earlier, at the age of 12, he’d attended Onion Lake residential school where he learned to paint with watercolours, though he missed out on learning to read and write.

Sapp contracted spinal meningitis when he was 14 and was unable to help his grandparents manage their cattle ranch of more than 200 head. His grandmother encouraged him to draw. He drew boys playing hockey on the slough behind his house and domestic scenes of his grandmother working.

In 1955 he married Margaret Paskemin Whitford of Little Pine Reserve. Their son David was born in 1957, but sadly, would die as a young man of about 20.

Further loss came when Sapp’s grandparents died. The couple moved to North Battleford, where Sapp worked in a craft store part-time by day, and painted at night.

By 1970, Sapp was concurrently showing art in London’s Alwin Gallery and in Los Angeles, one of Canada’s first Aboriginal artists to gain international attention.

The Allen Sapp Gallery opened in 1989 in North Battleford, populated with 80 paintings donated by Ruth Gonor from her late husband’s collection. Dr. Gonor died in 1985. His wife passed away in 2015.

By 1990, Sapp had fallen in love with Margaret Berryman, the woman who lived beside the Delormes with her elderly mother. After divorcing his first wife, he and Margaret married, travelling from one gallery event to another.

The two were matched in temperament, said Delorme. “They were both the kindest people you could meet. Allen would open his wallet to anyone who knocked on his door and said they were having tough times. And if anyone said they were hungry, Margaret would be in the kitchen cooking them up a quick meal,” she added.

According to Garven, whenever Sapp visited the gallery, he went to work immediately.

“He took it as his responsibility to ensure visitors, especially children, had the chance to learn about Cree culture, not only through his art, but through song and dance.

He wanted the children to know where he came from, and he wanted to share the richness of his culture, the nurturing and love taught to him by his grandmother.

“It was only 18 months ago that Allen saw a group of Grade 5 students, and from a distance he called them to come and sit down. He sang for them. It was a beautiful time. They were in awe that they got to meet the man himself.

“Our gallery staff, past and present, were dedicated to this man.”

Sapp embraced the Christian values of his grandmother, as well as Cree ceremonial ways.

“He would paint from memory and whenever he would paint something ceremonial, he would tell me he wasn’t supposed to paint it, like the sundance or raindance,” said Delorme. “But he missed ceremony so much when he got older that he would paint ‘religion’ as he called it, and then he’d sit there and stare at it.”

Sapp was awarded the Order of Canada in 1987. His travelling art exhibition “Through the Eyes of the Cree–the Art of Allen Sapp: A story of a people” toured 14 venues from Vancouver to Ottawa in 2003, and was seen by 250,000 Canadians.